Max Homa and his wife Lacey are expecting their first child together as they held a gender reveal party like no other involving their dog. 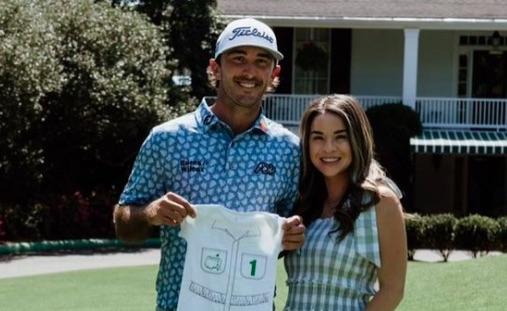 PGA Tour star Max Homa and his wife Lacey are expecting a baby boy together after an adorable and funny gender reveal party.

Homa and Lacey are set to have their first child together and the gender of their baby was told to them by their pet dog. He came bounding over with blue balloons attached to his collar.

This only meant one thing and Homa and his wife shared an embrace. The happy couple is very excited about what lies ahead with their new family.

Lacey is reportedly a real-estate agent and California Licensed Real-Estate Appraiser and Licensed Realtor. She married Homa in November 2019 and now they are looking forward to forming a trio.

Homa is one of the most popular players on the PGA Tour and a key reason for this is his outgoing personality and his entertaining posts on social media.

The 31-year-old's first victory came at the Wells Fargo Championship in 2019 when he won by three shots ahead of Joel Dahmen. He doubled his tally at The Genesis Invitational in 2021.

At the very start of the 2022 season, Homa won the Fortinet Championship by one shot from Maverick McNealy. He has achieved two top-10's in 13 events this season.

Homa is now entering a new realm of his life as he looking for his fourth win on the PGA Tour, but he is also preparing to become a father.