The Hero World Challenge saw some stunning shots but also some very strange shots from some of the world's best players. 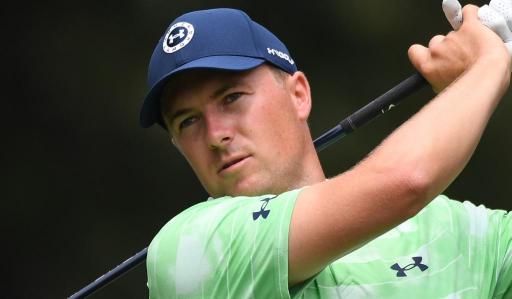 All of the nooks and crannies of Albany Golf Course were explored last week at the Hero World Challenge and some of the world's best players were scrambling around in tough situations.

One player who certainly didn't struggle with the Bahamas venue was Viktor Hovland who cruised to a one-shot victory over Scottie Scheffler.

The highlight of Hovland's final round came on the back nine when he made back-to-back eagles at the 14th and 15th holes. On the former, he holed out from the greenside bunker.

It was the Norwegian's second win of 2021 and he was one player to avoid a calamity during the event that was hosted by Tiger Woods.

RELATED: TREAT YOURSELF TO A NEW GOLF BAG AT CHRISTMAS WITH SCOTTSDALE GOLF!

Rory McIlroy, Bryson DeChambeau and Collin Morikawa were just some players who found themselves in very tight spots in Albany and the top five weird and wonderful shots for the tournament are here below.

Ditching the shoes and socks.@JordanSpieth rolled up the pants for this shot. pic.twitter.com/7tnUBIF17Q

Jordan Spieth from out the hazard

In the first round on Thursday, Jordan Spieth hit his drive to the left of the fairway and his ball stopped on the edge of the water, meaning his feet would be submerged for his next shot.

The three-time major champion took off his shoes and socks and got wet. Miraculously, he hit his shot to the back of the green, Unfortunately, he couldn't save par.

On the first hole of his third round, Bryson DeChambeau hit his approach to the green, but he tugged it left and flew the green. It came very close to hitting a fan.

He high-fived a lady behind the green but the former US Open champion, despite benefitting from an incredible break, three-putted for a bogey.

Collin Morikawa suffered an unprecedented collapse in the final round of the Hero World Challenge when he held a five-shot lead with 18 holes left.

The World No. 2 heavily hooked his approach to the 4th hole which landed straight into some bushes. This led to his first double-bogey. A horrible snap-hook shot on the 6th hole led to his second double-bogey in three holes. He finished in a tie for fifth.

Don't watch this before your Saturday round. pic.twitter.com/yxoW0WD673

Despite leading after the first round in the Bahamas, Rory McIlroy finished in outright 18th place. This was not helped by his putt on the 14th hole in round two.

He sent his putt powering to the hole and it just wouldn't stop. His ball rolled down a slope and about 10 yards off the green. He would go on to make a double-bogey.

Tyrrell Hatton finished tied ninth at the Hero World Challenge, once again cementing his claims as one of the most impressive English players in the world.

At the ninth hole on Saturday, Hatton's ball was underwater and he needed to find the green with his third shot on this par-5. He splashed his ball out to the front of the green and this helped him to make an astonishing par.