We have a late contender for one of the best par saves of the year... 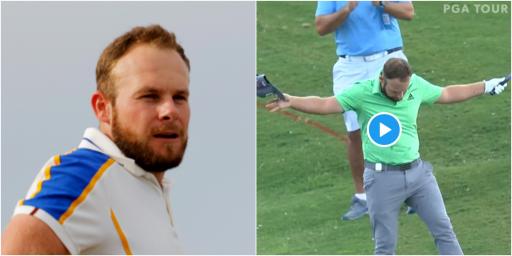 Tyrrell Hatton has emerged as one of the best players in the world over the last few years.

He's forced himself into the top 10 in the official world rankings, had a few big wins and earned spots on two Ryder Cup teams.

Hatton is known for some of his tempestuous outbursts and can always be heard letting his feelings known when he hits a bad one.

"Have you ever seen a worse putt? Answer the question. No. That's terrible."

Hatton, 30, is playing at the Hero World Challenge this week in Albany, where a certain Tiger Woods has re-emerged into the public eye.

The six-time European Tour winner would not have been pleased when his second shot into the par-5 ninth trickled into the water.

Unfortunately, we never really got to see a close up of the ball. Hatton decided not to take off his footwear.

Jordan Spieth had hit a shot from the water at the 18th on his second round but Hatton was content to one-up him.

Anything you can do I can do better. Hatton only had about 50 or so yards to the pin and he took one almighty wack at the ball.

It splashed out. Pure as anything. Was this actually a bunker shot?

Hatton duly acknowledged the crowd, taking off his hat and giving us a bow.

His playing partner, Norway's Viktor Hovland, chuckled. Hatton grinned. Then he made a watery par.