Jordan Spieth and Henrik Stenson didn't feel like playing the rest of their final round at the Hero World Challenge after facing two-shot penalties each. 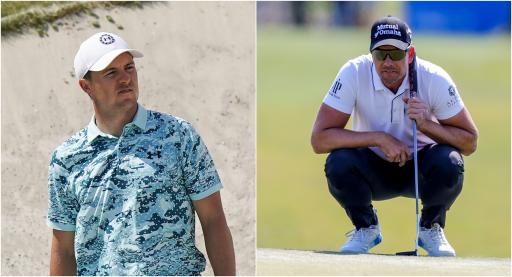 Jordan Spieth and Henrik Stenson comically asked the rules official if they could go home from the Hero World Challenge in the middle of their final round.

Both players had been penalised for playing from the wrong tee box on the ninth hole. They were given two-shot penalties and set back even further down the leaderboard.

Spieth finished in last place in the 20-man field and Stenson finished in 19th place. So it was a calamitous day for the pair, but they saw the funny side of things.

"My question (to the rules official) was if we could just finish 19th and 20th and leave after 9, but that wasn’t an option," said Stenson, who has always been an entertaining individual on the PGA Tour and DP World Tours.

"Yeah, he did. He asked them if we could just go to the airport and I said I’m down," said Spieth, who still collected $100,00 for coming last in the event hosted by Tiger Woods.

Sometimes all you can do is laugh. pic.twitter.com/YKHt2S5mGr

The confusion on Sunday began when the tee box for the 17th hole was moved overnight to where the ninth hole had been for the first three rounds.

The tee box on the ninth had been moved up for the last round to allow players to reach the green in two shots. Unfortunately, Spieth and Stenson were not aware of this as they were the first group out.

The PGA Tour claimed that they had clearly sign-posted the way to the correct tee box, but no one in the group realised. If they weren't informed of their infringement in the middle on the ninth hole and played through to the 10th, they would've been disqualified.

"We kept our heads down after finishing out on hole No. 8 and walked to the 9 tee box that we did on Wednesday, Thursday, Friday, Saturday and put the ball down and hit some beautiful tee shots," said Stenson after the infringement.

RELATED: JORDAN SPIETH HAD A MARE BUT STILL WON A FORTUNE AT THE HERO WORLD CHALLENGE

"Then when we went down to the hole, went down to the balls. The rules official said, did you hit off the right tee box? And we’re like, well, yeah, kind of, and then we looked back and we saw that there was another one forward and left.

"So obviously they switched things around and put 17 on the 9th tee box today and 9 was in a different place and we didn’t pay attention being first out and just motoring along."

They were each given two-shot penalties. You get the feeling that if it was a legitimate PGA Tour event, this may not have happened.

Nonetheless, it goes to show that even the best golfers in the world make mistakes.