Phil Mickelson and Bryson DeChambeau TRASH TALK ahead of The Match

Speaking to the media ahead of the big fixture, Phil Mickelson, Tom Brady, Bryson DeChambeau and Aaron Rodgers all took the opportunity to fire shots at each other. 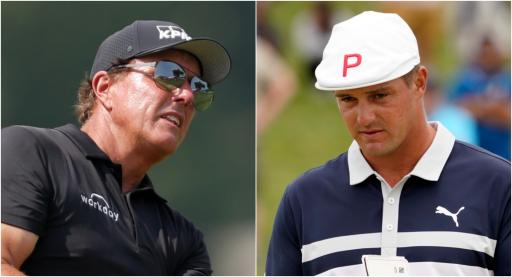 The fourth edition of The Match is finally upon us and on Monday, all four competitors took part in an intense and entertaining war of words.

Phil Mickelson is making his fourth appearance in the made-for-TV event and he will partner up with NFL legend Tom Brady against Bryson DeChambeau and Aaron Rodgers of the Green Bay Packers.

The Match will take place at The Reserve at Moonlight Basin in Big Sky, Montana and the pre-match sledging has well and truly begun.

Rodgers fired shots at the 2021 PGA champion after his disappointing finish at the Rocket Mortgage Classic at Detroit Golf Club last week.

"Phil coming off a solid T-70 in Detroit. He made three birdies on his last five holes to get to T-70. Bryson missed the cut, so not much better," said Rodgers.

Mickelson and Brady lost to Tiger Woods and former NFL quarterback Peyton Manning in the second edition of The Match, so they will be hoping to improve on their last performance.

After hearing Rodgers' comments, both golfers were not buying what they believed to be excuses from the 37-year-old.

"I think that sounds like a little bit of an excuse," said Brady.

"I’m not falling for it. I've seen him compete, he's one of the all-time great competitors that I've ever gone against. I've had a decent record against him lately and I'm hoping that continues on the golf course.

"Either he is trying to lull us to sleep so that we're not sharp. Tom and I aren't falling for that," added Mickelson.

"Or, he's trying to make an excuse before we even play as to why we're going to beat them so bad, so one of those two things is happening. I'm not sure because I don't know Aaron well enough to really identify which one of those it is, but we're not falling for it."

Whatever the result of The Match tonight, it is fair to say that viewers and spectators will have great fun watching some great golf and camaraderie.

NEXT PAGE: GOLF BETTING TIPS: OUR TOP PICKS FOR THE 2021 SCOTTISH OPEN