Cam Davis won his first PGA Tour title at the Rocket Mortgage Classic, but could he also win playing left-handed? 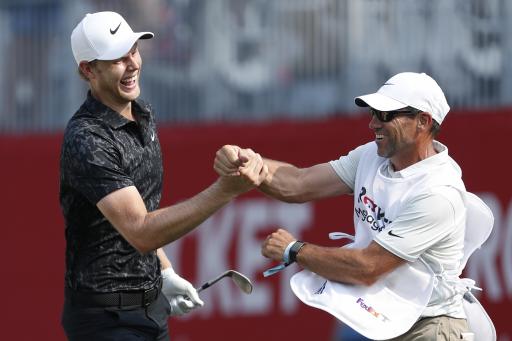 It is no secret that Cam Davis is an extremely talented golfer and this has never been more evident than when he won the Rocket Mortgage Classic, after a five-hole playoff with Troy Merritt and Joaquin Niemann.

Davis played an incredible back nine at Detroit Golf Club by holing a greenside bunker shot for an eagle on the 17th hole and then making a birdie at the final hole to reach 18-under-par.

On the first playoff hole, Joaquin Niemann made a bogey on the 18th hole to drop out of the playoff as Davis squandered a golden opportunity to win the playoff by missing a short birdie putt.

The Australian applied pressure on Merritt on each playoff hole and this became too much when Merritt lost on the fifth playoff hole, making a bogey on the par-3 15th.

Can Davis hitting right and left handed back in 2014.

This win for Davis comes four years after his first professional win at the Emirates Australian Open in 2017, but what also emerged this week was his amazing ability to play golf left-handed.

For 99% of us, we can just about play golf competently with the strongest side of our bodies, whether that is our left or our right side. But it is very rare to see a golfer that can play well with both hands.

Enter Cam Davis. Footage emerged of Davis on the driving range in 2014 where he hits a ball with his right hand and then takes a lefthanded club and hits one equally as well on that side.

This footage has left many golf fans in awe and many of them commented their reactions:

"If it doesn’t translate to a win, it’s useless," one fan commented.

"The ultimate exhibition of a moving 'mirror reversed' image. What a talent!" another fan said.

"And his left-handed swing might be better than his natural. What is this witchcraft?" another fan commented.

"I wonder if he felt like another golfer was holding his club," one fan said.