Phil Mickelson and Charles Barkley to commentate on The Match

Phil Mickelson will not be playing this time around but he will be commentating on The Match between Bryson DeChambeau and Brooks Koepka. 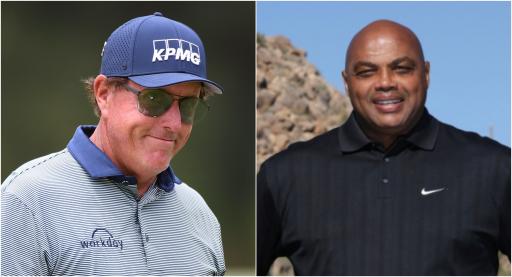 Phil Mickelson and 11-time NBA All-star Charles Barkley will provide commentary for The Match between Bryson DeChambeau and Brooks Koepka.

This is the first time that Phil Mickelson will not be playing in the popular fixture, but he will still provide intriguing and entertaining commentary alongside his former playing partner.

Lefty and Chuck teamed up together in the third edition of The Match and they beat the NFL's Peyton Manning and basketballer Steph Curry.

It was first rumoured that Barkley would take up broadcast duties alongside Turner Sports sportscaster Ernie Johnson, but instead, he will be paired with the six-time major champion in the gantry.

Brian Anderson will take up play-by-play duties during The Match between the two American golfers who underwent a feud during the 2021 PGA Tour season.

Tensions seem to have eased between DeChambeau and Koepka compared to when Koepka was visibly annoyed by his big-hitting opponent walking behind him during an interview at the PGA Championship in May.

The Ryder Cup at Whistling Straits could have been a flashpoint however it was anything but. After Team USA's historic 19-9 victory, the major-winning pair shared a hug in front of their teammates.

Mickelson is now an executive producer of The Match series while Turner Sports and American footballer and previous Match competitor Tom Brady’s 199 Productions are producing the event.

RELATED: WOULD YOU MISS YOUR CHILD'S BIRTHDAY FOR THIS AMAZING GOLF EXPERIENCE?

The Match is taking place at The Wynn Golf Club in Las Vegas on November 26 and it is a match play format over 12 holes.

The fifth edition of The Match is set to be an exciting event, even if it is only over 12 holes. DeChambeau has already tasted victory in this fixture when he and the NFL's Aaron Rodgers beat Mickelson and Brady.

NEXT PAGE: BRYSON DECHAMBEAU DRESSES AS JAMES BOND THEN DANCES WITH MICHELLE WIE