Phil Mickelson on Eli Manning's golf swing: "It's CUTE, but it could be better"

Lefty joined Peyton and Eli to watch some American football on ESPN. 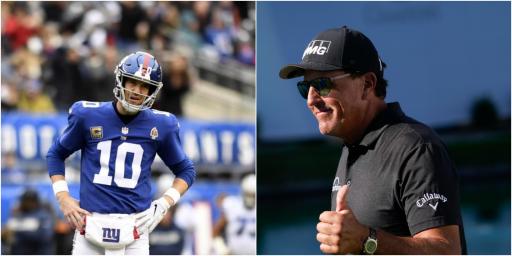 Phil Mickelson is putting his feet up for the rest of 2021.

He's had a stellar debut season on the PGA Tour Champions with four victories from six starts. He won more than $1 million in the process. He was a vice-captain to Steve Stricker's trailblazing Ryder Cup team that obliterated the Europeans at Whistling Straits.

Oh, and he became the oldest player ever to win a major championship when he tamed Kiawah Island to win the Wanamaker trophy at the PGA Championsip. No reason he's always smiling. He's also about to celebrate 25 years of marriage with his beloved Amy.

But even though we won't see him swing a golf club in competition for the rest of 2021, he's still got time for his classic jokes. He joined brothers Peyton and Eli Manning to watch some Monday night football on ESPN.

"I think it's a cute little swing." pic.twitter.com/CtwvllOlgv

Of course, they couldn't let him get away without asking him to take a look at one their swings. Poor old Eli. He was the subject. But it appears that Mickelson likes the move and even described it as "cute".

"Alright well let's see, I mean, overall, one word to describe it is cute. I think it's a cute little swing," the 51-year-old said. "The club is a little behind him and low going back so he's not able to...his arms aren't out in front of him, they get a little bit too flat.

"So, he has to use all of his athleticism to square the face. It's a pretty good golf swing. Like I say, it's cute, but it could be better."

So appreciative of Amy’s love and support as well as all the help from Tim and Andrew.
Congrats to Bernhard who at 64 won a 6th Schwab Cup.
A special week in Phoenix and thank you for so many great memories. pic.twitter.com/xV9aOak1YJ

NEXT PAGE: IS SCOTTIE SCHEFFLER THE NEXT TONY FINAU?