Rick Shiels dreams of a Tiger Woods video, even if he's just CLEANING his clubs

The popular YouTuber got into golf because of the big cat and he joked he constantly pesters his management for a collab. 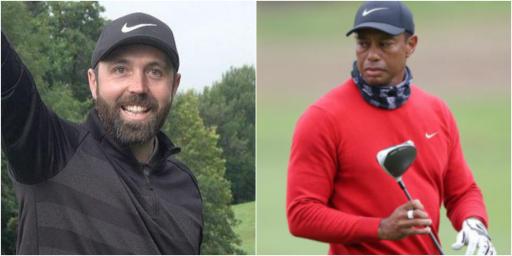 Whenever you browse golf tips on YouTube you'll invariably come across Rick Shiels.

He's one of - if not the biggest - names in UK golf now after he's established a massive following of nearly two million subscribers on the video platform. At the time of writing, he's at 1.93 million and closing in on a remarkable achievement for someone who has come from humble beginnings.

His brand deals have seen him collaborate with some of the biggest names in golf and play in some prestigious pro-ams. Not bad for someone who 10 years ago was uploading simple golf tips videos. Now they are uploaded with glossy editing and get hundreds of thousands of views.

In an interview with Metro, Shiels spoke about how he used qualifications in PE and drama to help him behind the camera. It felt natural to him, he said. Naturally, he was asked about Tiger Woods.

MORE: ARE YOU ALLOWED TO SCOOP THE BALL ON THE PUTTING GREEN?

Return of the Stinger. #starwars pic.twitter.com/R7srIDGXjl

He told the paper: "Tiger Woods is the reason my 11-year-old self got into golf in the first place back in 1997, coincidentally when Tiger won the Masters.

"To be able to shoot anything with Tiger – even if it's just cleaning his golf clubs – would be phenomenal. It'd be a passion piece for me, but as golfers we love Tiger so much, so that'd be amazing."

Shiels, now 35 years old, joked he tries to get in contact with the big cat's team. "I try most days," Shiels said. "I feel like I need to employ someone just to just hound Tiger's management."

WHAT A NIGHT! ⛳️ pic.twitter.com/Jh6TfdcGtx

MORE: THE RAGS TO RICHES STORY OF THIS PGA TOUR CHAMPIONS PLAYER

MORE: WHY IS BROOKS KOEPKA STRUGGLING?

NEXT PAGE: SHOULD HOODIES BE ALLOWED ON THE GOLF COURSE?