"Phil Mickelson is a lock for a Ryder Cup pick" - Which players could miss out?

Phil Mickelson won his sixth major championship this week at Kiawah Island, but has he also made it impossible for Steve Stricker not to choose him for the Ryder Cup? 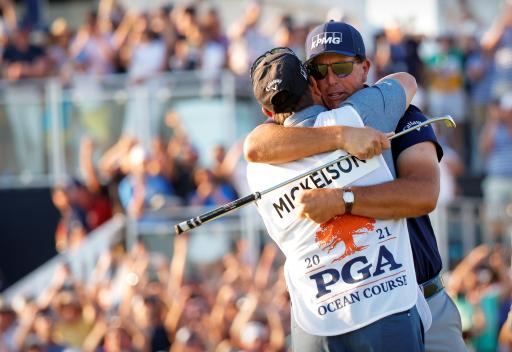 Phil Mickelson was having a very disappointing season before arriving at Kiawah Island last week to win the PGA Championship for the second time in his career.

From missing six cuts and making two top-25 finishes in 14 events, the 50-year-old made history as the oldest ever winner of a men's major.

His win has conveniently come in the same year as the rescheduled Ryder Cup at Whistling Straits and Mickelson has now given US captain Steve Stricker a headache.

Although the 45-time PGA Tour winner has shown bad form on tour, his sixth major win has propelled him up 36 places to 16th in the US Ryder Cup qualification standings.

Mickelson has played in every single Ryder Cup since 1995, which shows his longevity, experience and incredible consistency throughout his career.

He has played a total of 47 matches, 18 of which he has won and he has also been victorious in eight out of his 15 singles matches. Not only has Lefty become golf's oldest major winner, but he could also beat Raymond Floyd's record in becoming the oldest player to play in the Ryder Cup.

The event is set to be held at the treacherous Whistling Straits in Wisconsin, which is similar to Kiawah Island with its links-style terrain and bunker layout.

Mickelson could thrive yet again at a similar course and if he can keep up his superb play, then Stricker may have no choice but to lock him in the team.

The top six players in the qualification standings after the 2021 BMW Championship will qualify automatically, while the other six players will be chosen by the captain.

Daniel Berger and Billy Horschel currently sit in 9th and 12th place in the standings, but as neither has played in a Ryder Cup, one of their spots could be poached by Mickelson.

Jordan Spieth is currently 11th and Webb Simpson is 10th in the standings, but these two players have event experience and major-winning credentials on their side.

Sir Nick Faldo said after Mickelson's win in South Carolina that Stricker will be weighing up whether to choose him in his team, so it will certainly be an interesting next few months on the PGA Tour.

NEXT PAGE: TICKETS TO GO ON SALE FOR ABERDEEN STANDARD INVESTMENTS SCOTTISH OPEN