Phil Mickelson told a story about the PGA Championship at Kiawah Island just as Brooks Koepka was about to beat Bryson DeChambeau. 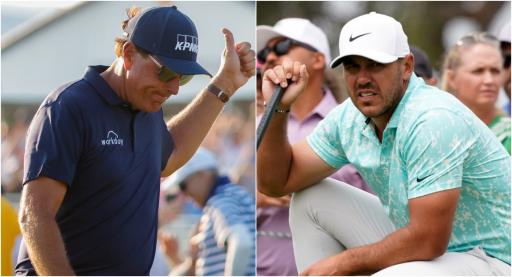 Phil Mickelson revealed a psychological technique that he used when battling with Brooks Koepka at the PGA Championship in May.

While on commentary at The Match, Lefty sat alongside NBA legend Charles Barkley and watched on as Koepka beat DeChambeau 4&3 in a comprehensive victory. DeChambeau didn't win a hole.

Koepka was 4 up with four holes to play and just before the four-time major champion sealed victory, Mickelson told a story of the mind games that he used to win the PGA Championship at Kiawah Island when paired with Koepka in the final round.

"When we were paired together in May, I knew that I didn’t want to antagonize him or upset him in any way because it was just gonna bring the best out in him," said Mickelson.

"So I went into that day thinking, ‘Alright, I’m not going to talk a lot to him because I don’t want to think I’m trying to get in his head.'

"And all I did was say the nicest of things like, ‘Oh, great shot!’ Or ‘Oh, what a great birdie!’ Or ‘Awesome up-and-down!’ Or whatever. Because I didn’t want to give him anything to feed off of because he just knows how to turn animosity or any type of energy from the crowd.

"Like with Tiger, when he was making that run at him at the PGA at Bellerive, he was able to harness that energy and bring out the best in himself and I just didn’t want to give him anything to feed off of."

Mickelson revealed his admiration for Koepka as a competitor in his victory speech after becoming golf's oldest ever major winner at the age of 50.

The 45-time PGA Tour winner has often comically mentioned his win at the USPGA in different social media posts and he reminded DeChambeau and Koepka in Las Vegas that he was the only one out of them to win a major in 2021.

Koepka, 31, is the envy of Mickelson in the sense that he was won two US Open titles and this is the only trophy that has denied Mickelson his career grand slam.

Now 51 and a multiple winner on the PGA Tour Champions as well, Mickelson could also have a promising career lined up in the commentary box, if his appearance at The Match last night is anything to go by.