Rory McIlroy swing: How his EXPLOSIVE transition shows he is a human launch pad

The Northern Irishman will begin his 2022 at the Abu Dhabi Championship. 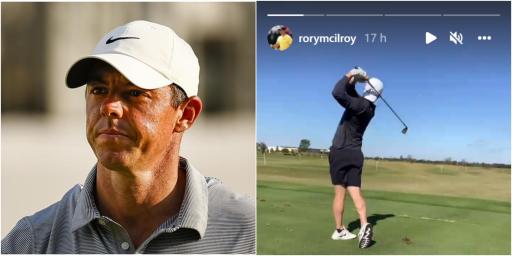 The year may be coming to a close but Rory McIlroy is still working hard.

The 32-year-old Northern Irishman shared a clip from one of his practise sessions after a frustrating end to the DP World Tour Championship.

McIlroy was in the lead but a stroke of bad luck then a string of bogeys saw him throw the tournament away.

Ruthless Collin Morikawa found five birdies in seven holes on his way to becoming the Race to Dubai champion.

Cue McIlroy shirt rip and another near miss for the dad of one, who has won 20 times on the PGA Tour.

With a backwards cap and wearing Nike trainers, McIlroy shows us his iron and driver swing.

Looking as pure as ever, there is one thing that you may not have noticed:

Notice how much lower he gets in transition, before extending upwards through impact.

Think of vertical jumping. You lower towards the ground so you can explode up.

Rory using same concept here to get a massive contribution from his legs pic.twitter.com/yHwWpxemfs

How will Rory McIlroy get on in 2022? pic.twitter.com/Fo0p0VxGgk

Pretty cool. Only we can dream of this transition.

McIlroy will start his 2022 at the Abu Dhabi Championship alongside Morikawa.

It will be his 12th appearance at the event, which was first staged in 2006.

McIlroy has never won there despite coming close on a number of occasions.

He finished sixth in the season ending DP World Tour Championship, and eighth in the points race.

McIlroy won his 20th PGA Tour title at the CJ Cup at Summit but even by his own admission was poor in the majors in 2021.