Phil Mickelson takes on par-3 challenge with his opposite hand

Phil Mickelson: "I actually think it is easier to play golf left-handed if you are right-handed at everything else." 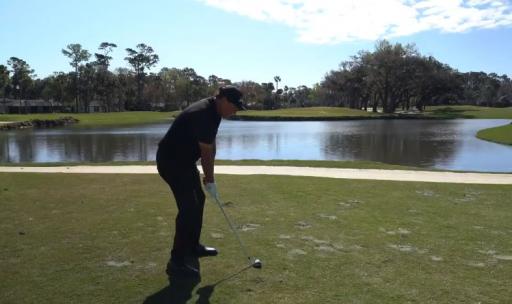 When you think of left-handed golfers, the first player that pops into your mind is likely to be Phil Mickelson, but it seems he's rather talented when he plays the sport with his opposite hand too.

Whilst taking part in a shoot with his sponsor Callaway Golf, Mickelson stopped to spend some time with Tron Carter from the popular No Laying Up podcast which has amassed over 250,000 followers on Twitter.

The pair were taking part in a par-3 challenge, but Mickelson had to play right-handed, while Carter also had to play with his opposite hand, so was taking on the challenge lusing his left.

WATCH MICKELSON PLAY RIGHT-HANDED IN THE VIDEO BELOW:

"When I started playing I felt the game was a little too easy righty and I wanted to make it more challenging so I started playing left-handed and it's fun for me now to go back and to see just how easy the game is right handed and how much easier it could have been had I stayed right-handed," Mickelson joked before the challenge.

Mickelson went on to make an interesting point. The five-time major winner said that he believes that if you are predominantly right-handed (which he is), then it's actually easier to play golf left-handed.

"I actually think it is easier to play golf left-handed if you are right-handed at everything else," he added. "Especially short game where you're creating a slice back-hand, it's much easier to chip when your dominant hand is leading the stroke, rather than trying to roll it over."

During the challenge, Mickelson was asked who he believes is the best player on the PGA Tour with their opposite hand.

Mickelson told an old story involving Vijay Singh, who according to Mickelson could do "remarkable" things left-handed and whilst playing alongside him once during the 90's, Singh reached a par-5 in two while using Mickelson's clubs, hitting the ball as "prestine" as anyone could.