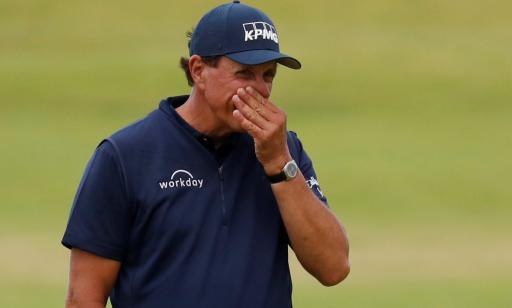 Phil Mickelson would appear to have switched into an armlock putter ahead of this week's WGC-FedEx St Jude Invitational at TPC Southwind.

Images surfaced on GolfWRX earlier today of Mickelson using his classic Odyssey PM putter but in a lengthened armlock version.

CHECK OUT THE PHOTOS BELOW

Should Mickelson indeed put this armlock putter in play this week, he will join the likes of Bryson DeChambeau, Webb Simpson and Matt Kuchar as players on the PGA Tour who adopt the method.

Olympic champion Xander Schauffele and Kevin Kisner are two other players who have dabbled with the armlock method in recent weeks, too.

Mickelson has occasionally dabbled with putting strokes and styles during his career, most notably when putting an Odyssey White Hot XG Sabertooth belly putter in play back in 2011, but more often than not he has remained true with his Odyssey PM blade that follows the same design as the classic Wilson 8802 from back in the day.

DEBATE: SHOULD ARMLOCK PUTTERS BE BANNED IN COMPETITION?

The armlock putting method has come under scrutiny in the golf industry as many believe the putter is essentially still being anchored to the body as it is wedged up against the leading arm of the stroke.

The anchored putting ban came into effect back in January 2016, which prevented players from anchoring the putter into their stomach or chin.

It led a number of players to find different putting styles, of which armlock putting became the most logical transition for many players.

Mickelson, who became the oldest major champion in history when winning the US PGA Championship at the age of 50 earlier in May, has endured something of a hangover in his last five tournaments with two missed cuts and a best finish of tied 61st.

NEXT PAGE: MICKELSON JOKES WITH SCHAUFFELE OVER OLYMPIC GOLD MEDAL