You will not believe how much CT Pan's BRONZE medal at the Olympics is worth! 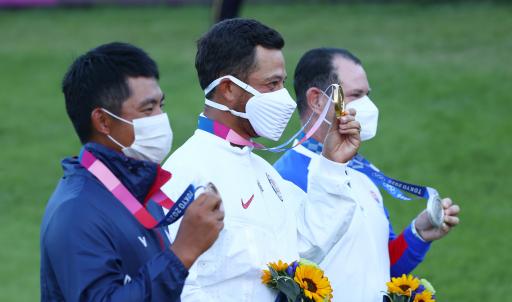 CT Pan's bronze medal performance at the Men's Olympic Golf Tournament in Tokyo last week has landed him five million New Taiwan dollars, which is the equivalent of $179,000.

According to Forbes, Chinese Taipei has the second highest payment structure of all countries competing at the Olympic Games.

The country offers a whopping 20 million New Taiwan dollars for a gold medal, which equates to $716,000.

Pan came through a seven-man playoff that included the likes of home favourite Hideki Matsuyama, Ireland's Rory McIlroy and Team USA's Collin Morikawa in order to seal his bronze medal.

While you can't put a financial figure on winning an Olympic medal, the $179,000 prize for Pan does at least mark his second biggest payday of the season.

Pan's best result this year was a tie for third place finish at the Honda Classic when he took away $320,600.

RELATED: XANDER SCHAUFFELE TO MARK HIS BALL WITH HIS GOLD MEDAL WHEN HE NEXT PLAYS PHIL MICKELSON

Only Singapore offers more money at the Olympic Games, with 1 million Singapore dollars up for grabs for anyone returning with a gold medal. That equates to $738,000.

How left out Xander Schauffele must feel after having only received $37,000 from the United States for his Olympic gold medal.

Pan finds himself in 116th in the PGA Tour's season-long FedEx Cup race, where the top 125 qualify for THE NORTHERN TRUST, the first Playoffs tournament from August 19 to 22.

NEXT PAGE: LEXI THOMPSON'S CADDIE FORCED OUT OF THE FIRST ROUND OF THE OLYMPICS DUE TO HEAT EXHAUSTION