Lefty is definitely still enjoying his victory at the notoriously difficult course and he told a fan why. 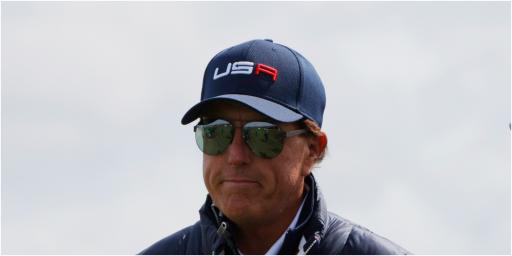 Phil Mickelson is certainly still lapping up the plaudits months after he became the oldest player to win a major.

Lefty won the PGA Championship at Kiawah Island in May to the surprise and astonishment of the golf world but has been dining out on it ever since.

Mickelson has also been busy winning tournaments on the PGA Tour Champions, posting updates on his Instagram and moaning about the USGA.

The 51-year-old fought off father time to claim that major but he insists he's only visiting the seniors' circuit and his main focus is the PGA Tour.

But he's still taking time to sign autographs and remind us just how good that victory was.

And a great moment was captured on film this week.

Mickelson is playing the Dominion Energy Charity Classic and a fan walked up to him and told him his name and that he's one of his fans.

RELATED: MATSUYAMA LEADS AFTER 36 HOLES IN JAPAN ON PGA TOUR

Phil Mickelson becomes the oldest major champion EVER with victory at the #PGAChamp! pic.twitter.com/M6TeU4wSJl

It's clear to us this Mickelson will probably feast on his Wanamaker win for some time to come.

And we don't mind that.

Mickelson was recently asked if his visits to the PGA Tour Champions are giving him a new lease of life.

He told the media: "I'm using this as an opportunity to have fun, to be around people that I know, guys that I know. I'm using it as a chance to be competitive but in an environment that doesn't beat you up."

Mickelson will be looking for his fourth Champions title in five starts.

NEXT PAGE: IS THIS THE BEST TIGER WOODS AD EVER?