"We don't know what the future is, but how could you watch your mate suffer and go through that and not recognize he needs to step away?" 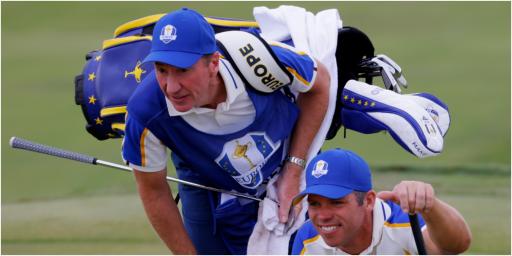 In recent years the world of high-level sport has had its reckonings with mental health issues.

Naomi Osaka, the tennis champion, has told of her struggles and got the backing of Rory McIlroy.

While others have also put their heads above the parapet and announced they too are struggling.

In golf, it was Matthew Wolff who spoke out and said he wasn't the happiest and needed to take some time away and focus on himself.

Last year @Paul_Casey's caddie gave him the wrong club into 18.

His reaction is just as brilliant today pic.twitter.com/EKu97eZvts

Now Paul Casey's caddie John McLaren has announced he will do the same after the last 18 months has taken its toll on him.

McLaren, known in the golf world as Johnny Long Socks, told the PGA Tour: "The accumulation of the last 18 months of travel, the testing, the uncertainty has taken its toll, not only on me, but how I am at home with my family.

"And once that starts to have an impact on my young children and my wife, whom I very much love, then the questions start to arise about the sacrifices relative to what needs to be gained.

"Each weekend I'd be sitting basically with my fingers crossed, hoping that I was going to test negative so that I could get home.

"And then the flip of that, obviously when I got home, I'd have to do more tests and isolating at home, et cetera, while planning to come back to work for Paul, thinking, well now I hope I don't test positive with my family and children because then that's then going to make Paul's life not as comfortable and easy because he's not certain his caddie is going to make it back."

McLaren, 55, is a veteran of the circuit and has carried the bags of Luke Donald and Tony Johnstone over more than three decades.

Casey is fully supportive of his caddie and told the PGA Tour they will work together again.

"This is a brave thing to do. This is Johnny stepping away for an indefinite break, be it six months or whatever it's going to be, because he needs it," he said.

"His health and well-being is what’s most important. We don't know what the future is, but how could you watch your mate suffer and go through that and not recognize he needs to step away?

Casey added: "This is a genuine moment where you've got two guys who are really good friends and one guy going, ‘I need to take a break,’ and the other guy going, ‘OK, I fully support that.'

"In this current environment we're in, it just doesn't seem to happen. And nobody seems to speak about it, either."

It's doubtful the pair will do "another long stint" like this again, Casey added.

But he said he was proud of the fact they are closer mates now after working together for many years.

NEXT PAGE: ZOZO PLAYER MISTAKEN FOR CADDIE ON PGA TOUR