Sam Burns holed a monster putt from off the green at Colonial Country Club to defeat Scottie Scheffler at the Charles Schwab Challenge. 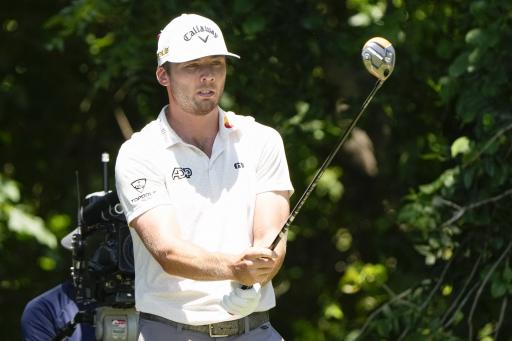 Sam Burns produced an outrageous putt from off the green in a playoff over World No.1 Scottie Scheffler to claim his fourth PGA Tour victory at the Charles Schwab Challenge.

Burns matched the biggest comeback in tour history after coming from as many as seven strokes behind Scheffler's score at the start of the day to post the clubhouse lead at 9-under par.

Scheffler, 25, was bidding for his fifth PGA Tour win in nine starts but struggled to get anything going in his final round and had to settle for a playoff with his good buddy after posting a 2-over 72.

Burns, on the other hand, played like a man possessed. He managed to make seven birdies and only dropped two shots in conditions that were more suited to a U.S Open.

The firmness of the greens and gusting winds made for some incredibly high scores on some holes for the chasing pack at Colonial Country Club in Fort Worth, Texas.

Harold Varner III, still looking for that elusive PGA Tour victory, was in the frame again. By the time he'd played No. 11 he was 2-under for the day. But a devastating triple bogey at No. 12 cost him.

His head was scrambled as his race was run. Varner III followed that with another double at No. 13 and another triple bogey at No.14. At No. 17, he carded another double bogey for good measure.

At one point, Varner III was 10-under par on the back nine but finished his tournament at level par for one of the more spectacular blow-ups we have seen on the PGA Tour this season.

Like Varner III, Davis Riley was left to rue what could have been. The impressive rookie, who is still yet to have a Wikipedia page, was again in the frame for a win.

His swing has been described as visually as impressive as Rory McIlroy, Adam Scott and Louis Oosthuizen. But the one he made on the tee at No. 14 was as bad as they come to end his chances.

Scheffler eventually carded a 2-over par 72. He gave himself a golden opportunity on the 72nd hole by only giving himself a wedge into the 18th green but sent his approach into the bunker.

His third shot out of the sand was a little heavy and he gave himself a testing five-foot putt for par which he duly sank to set up the playoff with Burns.

Both players managed to give themselves good angles into the pin at the par-4 18th hole and in truth it was advantage Scheffler as he found himself below the hole.

Burns played first after sending his approach into the green with perhaps a little too much heat. He had waited more than two hours for the playoff but sank a monster putt of 38 feet.

More tears flowed for Burns who simply couldn't believe what had just happened.