Rickie Fowler shared the lead at Detroit Golf Club at one stage on Saturday, but he needed a lot of luck on the 14th hole to mount his challenge. 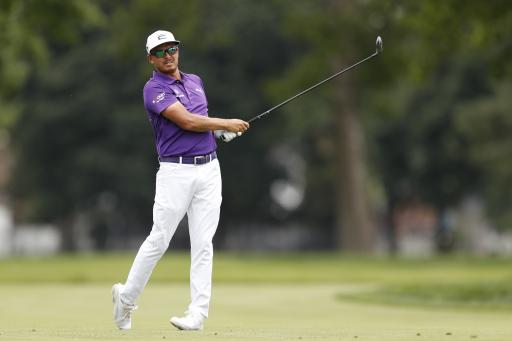 It is very rare to see a professional player on the PGA Tour top his ball or hit one thin, but every amateur golfer was offered reassurance on Saturday after they watched Rickie Fowler approach the par-5 14th hole at the Rocket Mortgage Classic.

Fowler began his third round with a birdie at the first hole but a bogey at the second hole, but the World No. 95 then went on an impressive charge.

The former World No. 4 golfer made five birdies in his next 12 holes, including a miraculous break that he benefitted from on the par-5 14th hole.

Probably not how he intended to find the green ...@RickieFowler (somehow) reaches the par-5 14th in two. pic.twitter.com/PkniGFteuw

Fowler had 264 yards left into the hole and with a wood in his hands, he connected poorly with the ball to hit a low, skimming shot that looked destined for the water.

Luckily for Fowler, his ball faded in the air and rolled by the hazard and finished on the green, much to the amazement of the commentators and spectators at Detroit Golf Club.

The five-time PGA Tour winner couldn't believe his luck either by the look on his face, but when these breaks come along, you have to take them with both hands.

Fowler finished with a round of 4-under-par on Saturday to finish on 9-under-par for the tournament, five shots behind co-leaders Troy Merritt and Joaquin Niemann.

Troy Merritt had a day to remember as he made his first career hole-in-one on the par-3 11th hole. This gave the American a three-shot lead at that point, but he made a bogey to fall back to 14-under-par alongside Niemann.