Rickie Fowler may have found the key to his form on the PGA Tour, as he sported new headwear on Friday at the Charles Schwab Challenge. 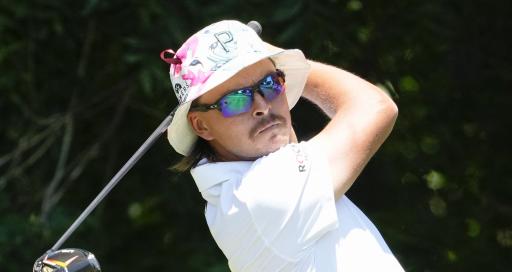 Rickie Fowler made his third cut in a row on the PGA Tour as he looks to finally kickstart his season at the Charles Schwab Challenge.

Fowler made three birdies but frustratingly made a double-bogey on the par-4 5th hole to prevent real progress up the leaderboard. His round of 70 took him to tied 40th place.

The five-time PGA Tour winner isn't anywhere near his peak standard of fourth in the world rankings, but perhaps he has found the key with a new piece of headwear.

Fowler sported a white, flowery PUMA bucket hat in the second round at Colonial Country Club and he certainly caught the eye of the viewers at home.

The 33-year-old has missed six cuts on the PGA Tour this season, but there have been glimmers of a recovery in his last two appearances. He made the top-25 at the US PGA Championship and the Wells Fargo Championship.

Related: Our BEST BETS for the weekend at Charles Schwab Challenge

He is winless on the PGA Tour since the Waste Management Phoenix Open in 2019 and he has failed to qualify for The Masters two years in a row.

"If you're driving it well it's a lot easier," Fowler said after his first round.

"You start getting in the rough, the greens aren't very big to begin with and you can get in some tough situations around those greens when you're playing from the rough, not able to control the ball, and not really sure how far it's going to come out, and if it knuckles the wrong direction, starts going with the wind, no telling when it's going to stop.

"Yeah, a little out of position off the tee, it's playing a lot of defence, just trying to hopefully salvage par but not bring any big numbers in."