Scottie Scheffler is back on top of the leaderboard on the PGA Tour, sharing the lead with Beau Hossler and Scott Stallings at the Charles Schwab Challenge. 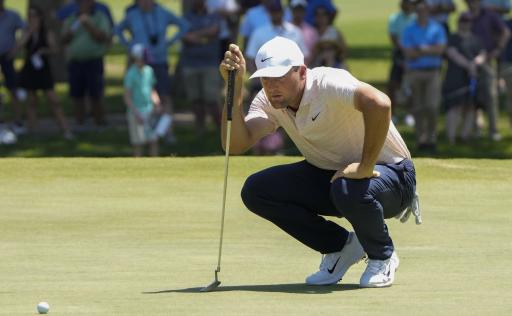 Scottie Scheffler is yet to make a bogey in 36 holes at the Charles Schwab Challenge and this is why he shares the lead heading into the weekend.

After his round of 65 on Friday, Scheffler told the press that his driving was "10 times better" than the first round and it showed. His driving accuracy percentage was almost 80%.

The 25-year-old almost hit every green in regulation in the second round too. He shares the lead on 9-under-par with Scott Stallings and Beau Hossler.

After missing the cut at the US PGA Championship, the FedEx Cup leader has put that behind him and he has had a stress-free week at Colonial Country Club so far.

"I love that stat (bogey-free). It's a lot of fun. I kept the stress off myself for the most part. My lag putting was really good, and really the only long par putt I made was on No. 7, and outside of that, I really didn't put much stress on myself," Scheffler said after his round.

Of course he still made the putt

"A four-day event having a day where I can take the stress off, especially when the conditions are going to be so hard the next two days is important.

"These fairways aren't wide, and when it starts blowing like that, it can create some big gusts and awkward angles around this place, so it's going to be a challenging weekend for sure."

Scheffler is incredibly looking for his fifth win this season, which would have all come in his last 10 starts. He entered the 2022 season winless and outside of the world's top 10.

Patrick Reed is one shot behind the leading trio on 8-under-par, while Chris Kirk and Pat Perez are in tied fifth place on 7-under-par.

Next Page: Why Tiger Woods will carry on, according to one PGA Tour legend