Robert MacIntyre emulates Bryson DeChambeau but with a putter off the tee! 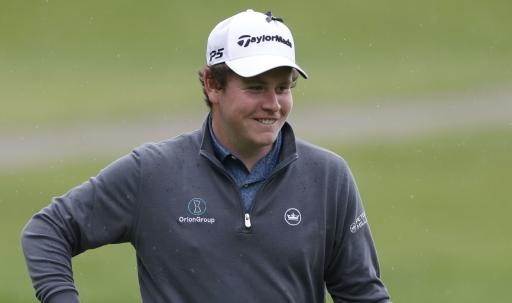 Robert MacIntyre hit a stunning tee shot with a putter during the One-Club Challenge on the European Tour, emulating the celebration of Bryson DeChambeau.

MacIntyre was competing against fellow European Tour players Andy Sullivan and Jorge Campillo in a challenge where each player randomly selects a club to use to complete a hole in the least amount of shots.

They played the challenge on the 18th hole at The Belfry and after all three players made a five with their respective clubs, they went back to the 18th tee box for a playoff.

The playoff required each player to find the fairway with a putter, and MacIntyre stepped up and smashed his ball 209 yards down the fairway, which couldn't be matched by his opponents.

When the Scotsman saw his ball fly into the air, he celebrated in DeChambeau-style by pointing his arms into the air.

Although MacIntyre hit a superb shot, it didn't quite match the drive that was hit by DeChambeau when he first made the arms-in-the-air gesture during the third round of the Arnold Palmer Invitational in March.

On the par-5 6th hole at Bayhill in Florida, the World No. 4 hit his drive a staggering 370 yards and this left him with only 70 yards left to the hole.

This was one of many fantastic shots that the 2020 US Open champion hit that week, as he secured the victory which was the eighth PGA Tour win of his career.

NEXT PAGE: GOLF FANS REACT AS MAX HOMA FINALLY AGREES TO PLAY A ROUND WITH SUPER-FAN