It's a good job Phil was there to save the day... 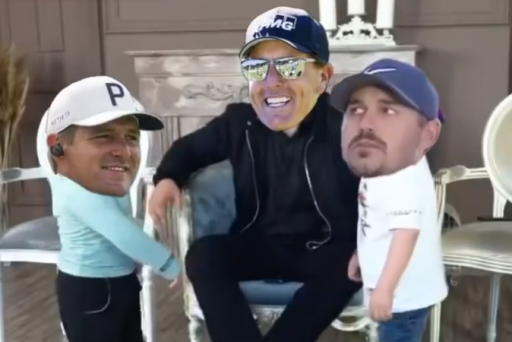 A video of Phil Mickelson separating a fight between Bryson DeChambeau and Brooks Koepka has gone viral on social media this week.

Check out the comical clip of Koepka and DeChambeau exchaging blows with Mickelson stepping in to solve their squabble. Some will say it's fake though...

The mock video above, posted by @the19thsociety on Instagram, comes off the back of another war of words between DeChambeau and Koepka.

While it's been no secret in recent years that the American duo clearly do not see eye to eye, their dislike for each other was once again evident to the public following a video from the US PGA Championship at Kiawah Island.

Koepka was being interviewed by Golf Channel but stopped mid-way through as DeChambeau walked past in his metal spikes. Koepka then rolled his eyes and fired an expletive down the camera after DeChambeau muttered a comment under his breath in the direction of Koepka - WATCH HERE

Since that clip on the weekend of golf's second major of the season, DeChambeau and Koepka have traded yet more blows on social media.

Their frosty relationship has seemingly divided golf fans around the world, with some loving every second of it and others questioning its reality.

Others seem to just think their latest spat has come as a direct result of the PGA Tour's new Player Impact Program, which is throwing a ton of money at players engaging most on social media.

Check out some of the comments to parody video below:

"I've been laughing for days at this... comedy gold."

"It's a good job uncle Phil was there."

"I cannot stop watching this."

"My money is definitely on Bryson in this one."

NEXT PAGE: JUSTIN THOMAS TALKS ABOUT HIS SPECIAL BOND WITH MIKE VISACKI