Rory McIlroy shares the lead with 18 holes to play as he bids to defend the RBC Canadian Open. 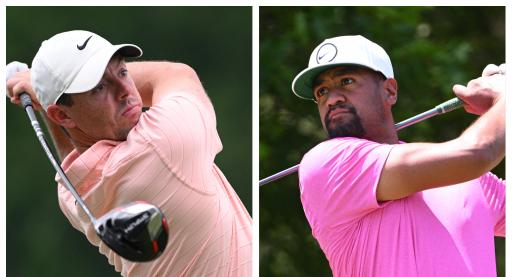 Rory McIlroy has moved into a share of the lead at the RBC Canadian Open on the PGA Tour as the Northern Irishman bids to successfully defend his title in the tournament that was last played in 2019.

McIlroy carded a solid round of 5-under 65 to progress to 11-under par for 54 holes, a score that was reached earlier in the day by Tony Finau, who flew round St George's Golf & Country Club in an incredible 8-under 62.

Four-time major champion McIlroy is going in search of a 21st PGA Tour title on Sunday, while Finau is looking for his hat-trick.

"I played really well," said McIlroy, who narrowly missed a six-foot putt for birdie on the 18th.

"I was frustrated to miss that putt on the last but overall played great and bounced back from the bogey on 8, playing 4-under from there in.

"Drove the ball well, hit some better wedge shots today, and holed a few putts so all aspects of the game are feeling good and just need to take that into tomorrow."

The Canadian fans might not have one of their own on the leaderboard going into Sunday, but it's fair to say they have adopted McIlroy as one of their favourite players.

And McIlroy is hoping to give them plenty to cheer about in the final round.

"I haven't played in an atmosphere like this for a very long time," added McIlroy.

"It's a good opportunity for me to shoot a good score tomorrow and hopefully get over the line."

Finau and McIlroy lead by two shots over a chasing pack that includes recent Charles Schwab Challenge winner Sam Burns (65) and US PGA champion Justin Thomas, who posted a stunning 63.

England's Matt Fitzpatrick (70) is a further shot adrift on 6-under par as he once again struggled on the back nine just as he did in round two.

World No.1 Scottie Scheffler had a rare day to forget this season with a round of 71 and he has all-but thrown himself out of the running for a fifth PGA Tour title in his last 10 individual starts now down at 3-under par for the tournament.

Next Page: How much they all won at the LIV Golf Invitational Series at Centurion Club