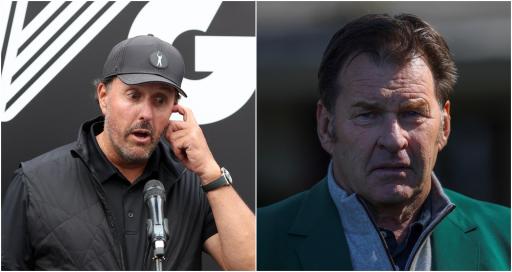 Sir Nick Faldo and legendary commentator Jim Nantz finally addressed the elephant in the room during PGA Tour coverage of the RBC Canadian Open this week.

As you are probably aware. There is a bit of situation developing in the golf world of late. The PGA Tour resignations are coming thick and fast as the Saudi-backed LIV Golf league gathers steam.

The PGA Tour have, of course, not said too much publicly about the drama behind the scenes. It somehow went un-noticed that Patrick Reed quietly withdrew from Canada on Tuesday morning.

Then, during Saturday’s final round broadcast of the LIV Golf’s inaugural event Reed jumped on the live stream to announce he was “super excited” for a new chapter in his career.

Both Nantz and Faldo took turns to take swings at the league. The word “betrayal” was used. Nantz noted that Schwartzel’s win was the first in six years. He then asked Faldo for his thoughts.

“No. 1, you saw those faces, you can’t feel good being a major champion to be suspended from the tour. We’ve got two totally different golf tournaments. One, we play for tournaments and national championships over here. And the LIV Tour is what, 54 holes and not cut, shotgun start, you know, it sounds crazy.

“And the other thing that is very noticeable is the players that have left. Obviously, they’re in their mid-40s, they’ve been out here on tour, they’ve been battling away and they probably know they can’t win out here against the youngsters. So they’re taking the easy option to go over and try and win a boatload of cash.”

“What I keep hearing from people, too, is a sense of disappointment, even a little betrayal. They’ve always been told the story – and I know it was true – that at some point in their careers the dream was to play on the PGA Tour, build a legacy, build your future financially.

At the time of writing, Rory McIlroy, Justin Thomas, Sam Burns and Tony Finau were all in contention to win in Canada going into the final round.

Thomas, 28, noted that the win this week would feel of added significance.