Rory McIlroy admitted Phil Mickelson made some legitimate points in his remarks that led to his exile but he didn't approach the situation in the right way. 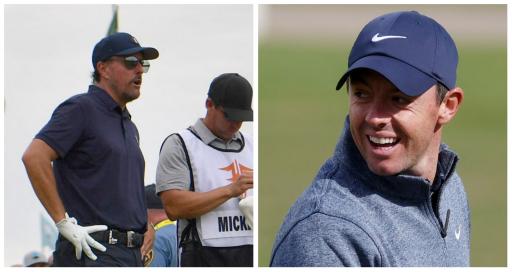 Rory McIlroy conceded some of the ideas Phil Mickelson touted about the PGA Tour in his famously controversial remarks "had merit".

But the Northern Irishman claimed Lefty approached the situation in the incorrect way before going all-in with LIV Golf for a reported $200m.

McIlroy spoke to the media on 24 August before the Tour Championship at East Lake where he is attempting to win the FedEx Cup for the third time.

The 33-year-old was speaking only moments after the PGA Tour commissioner Jay Monahan outlined some bombshell changes for the 2023-2024 season.

Some of the changes include:

McIlroy again reiterated players are free to make their own choices as to whether they sign for LIV Golf or not.

But he claimed that some players were making decisions without "the facts".

McIlroy also revealed that had a private chat with Cameron Smith after the 150th Open championship about it all.

He was asked if the changes that were announced would make any difference to the players who are reportedly going to LIV after the conclusion of the Tour Championship.

He told the media: "So my whole thing, like I had a conversation with Cameron Smith two days after the Open, and firstly, I wanted to congratulate him, but also I wanted -- guys that are thinking one way or another, honestly I don't care if they leave or not. It's not going to make a difference to me.

"But I would at least like people to make a decision that is completely informed and basically know this is what's coming down the pipeline. This is what you may be leaving behind.

"I just don't want people making decisions -- hearing information from one side and not from another. So I think that's sort of been my whole thing this entire time. I've always said guys can do whatever they want.

"Guys can make a decision that they feel is best for themselves and their families. But I want guys to make decisions based on all of the facts.

"Sometimes I don't think some guys made those decisions based on having all the facts in front of them."

Mickelson previously said one of the reasons he was willing to work with the "scary" Saudis was because it was a "once-in-a-lifetime" opportunity to re-shape the PGA Tour and how it operates.

Lefty conceded that he wasn't even sure if he wanted LIV Golf to succeed.

What must Mickelson be thinking now?!

Here's the full exchange when McIlroy was asked about Mickelson:

Q. Obviously several months ago Phil made some comments about the Tour that were pretty harsh. I'm just wondering in light of what we've learned today if any of his underlying points had some merit. Maybe not the egregious ones, but if you dug down deeper, is there any truth to some of that, and is that why we're seeing this now?

Rory McIroy: "Yeah, as much as I probably don't want to give Phil any sort of credit at all, yeah, there were certain points that he was trying to make. But there's a way to go about them. There's a way to collaborate. There's a way -- you get all the top players in the world together and you get them on the same page. You then go to the Tour and you suggest ideas and you work together. This was pure collaboration.

"Were some of these ideas, did they have merit? Of course they did. But he just didn't approach it the right way."

Next page: Talor Gooch didn't think LIV fallout would be "this extreme"