Rory McIlroy's struggles off the tee continue on day three at the Travelers Championship. 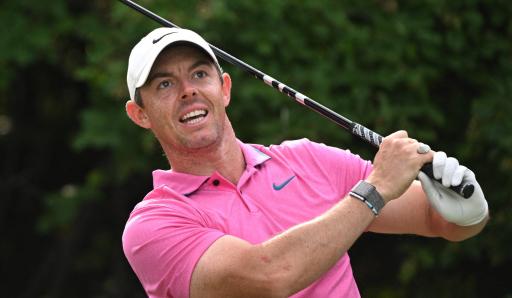 Rory McIlroy's incredible struggles off the tee continued in the early stages of the third round at the Travelers Championship.

McIlroy, who made a quadruple bogey and a double bogey on the back nine on day two, returned to TPC River Highlands to clatter his tee shot into the tree some 100 yards in front of him at the par-4 2nd.

From there, McIlroy thrashed at the ball but it went about 10 feet in front of him. He then had another go and the ball came out well left into the rough.

McIlroy hit a solid fourth shot onto the green to some 30 feet but he would go on to two putt for yet another double bogey.

What on earth is Mcilroy doing

Rory McIlroy has hit 3 shots and he hasn’t reached the fairway yet pic.twitter.com/e3V7xh2TLP

Oh my god Rory Mcilroy has forgotten how to play golf

Rory McIlroy has fully lost the plot I think

What’s he playing at at the Travellers ??

What Rory McIlroy really needs today is a good start at the @TravelersChamp - nice & solid first few holes to get over yesterday's disappointing....

The last time McIlroy made three double bogeys or worse in a tournament came at the 2021 Players Championship.

On the 4th hole, a frustrated McIlroy hit his drive to the right and then thumped the head of his driver down onto the Travelers Championship tee box marker.

That would lead to a par but he would then duff a chip on the par-3 5th hole as another bogey went down on the card.

McIlroy would get that shot back with a birdie at the par-5 6th and he would then nearly hole out with his approach to the 9th en route to another birdie to take him out in 1-over par.

He currently finds himself at 7-under par and well off the pace in the tournament.

If you missed the action on day two, McIlroy found himself in a one-shot lead when on the 12th tee but he would go on to make a quadruple-bogey eight after sending his tee shot out of bounds.

It marked just the sixth quadruple bogey of his PGA Tour career.

WATCH: MCILROY MAKES A QUADRUPLE BOGEY AT THE TRAVELERS CHAMPIONSHIP

NEXT PAGE: RORY MCILROY ON HIS COMEDY OF ERRORS - "IT CAME OUT OF THE BLUE"