Xander Schauffele leads by one going into final round at Travelers

Xander Schauffele will take a one stroke lead going into the final round of the Travelers Championship on the PGA Tour. 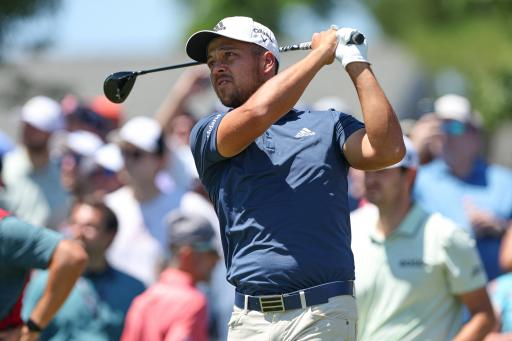 Overnight leader Xander Schauffele will take a one stroke lead going into the final round at the Travelers Championship.

American Schauffele carded his first bogey of the week at No. 13 at TPC River Highlands on his way to a third round of 3-under 67 to follow his opening 63-63 on Thursday and Friday in Connecticut.

The 28-year-old is in search of his sixth PGA Tour victory. Incidentally, his closest competitor is Patrick Cantlay (63), whom he teamed up with to claim the Zurich Classic earlier in the season.

Northern Ireland’s Rory McIlroy endured a calamitous back nine yesterday and needed a solid third round to force himself back into the running but he fired a 2-over par round and is now T-31.

He also did this.

The surprise player of the week is the amateur and sponsor exemption Michael Thorbjornsen, who is currently seventh on 11-under par. A Saturday 66 followed his opening rounds of 68-65.

World No. 1 Scottie Scheffler said of the young amateur: “I've seen his name, I haven't him hit a shot, I haven't seen him do anything.

“But any time you see a kid who is 20 years old up on the leaderboard you know he's got a lot of talent and also no fear.

“That's kind of big. Because there's tons of guys in college that are really talented and they get out here and maybe they're not really sure how talented they are and they come out maybe a touch tight.

“I did that a few times in my professional starts as an amateur. You don't really know what to expect, so for a kid to come out here and put his name up on the leaderboard is really impressive.”

Elsewhere, American Morgan Hoffman, playing on his final medical exemption, has made the cut.

He sits on a score of 1-over par. Hoffman was diagnosed with facioscapulohumeral muscular dystrophy in 2016.

The odds are stacked against Hoffman retaining full status as the 32-year-old needs a two-way T-2 or better to stay fully exempt for the rest of the season.

Alternatively, he needs a solo fourth or better to keep conditional status.

He will have partial Korn Ferry Tour status for the rest of 2022 because of his finish in the 2018 FedEx Cup.

He moved to Costa Rica after his diagnosis in search of non-western medicines.

Beyond this week, he does not know what the future holds.