Rory McIlroy now the betting FAVOURITE for the PGA Championship

Rory McIlroy won his third Wells Fargo Championship title at the weekend and he is set to return to the site of his first PGA Championship win at Kiawah Island later this month. 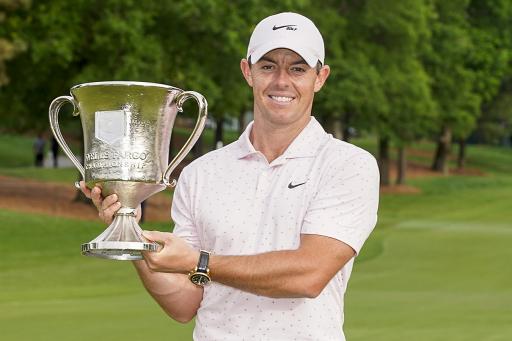 Off the back of his third career win at the Wells Fargo Championship, Rory McIlroy is now the betting favourite for the PGA Championship this month.

The Northern Irishman put his poor recent form behind him at Quail Hollow Golf Club, when he secured a one-shot victory ahead of Abraham Ancer, despite a final-hole scare.

Although he was under threat of missing his fourth cut in his last seven events when he shot 1-over-par on Thursday, McIlroy recovered with three consecutive rounds in the '60s to finish on 10-under-par.

This was the 19th PGA Tour win of his career and it is the first time that he has won an event on three separate occasions.

The 32-year-old is now the favourite with bookmakers to win his fifth major title at Kiawah Island, where he won this exact tournament back in 2012.

McIlroy was in scintillating form at the famous South Carolina venue nine years ago. He shot 6-under-par in his final round to win his second major championship by eight shots from Englishman David Lynn.

The Northern Irishman, who lifted himself back into the world's top ten last week, can be found as short as 9/1 to win the PGA Championship.

World No.1 Dustin Johnson, who is set to miss another PGA Tour event at the AT&T Byron Nelson this week, is the second favourite with most bookmakers at 12/1.

Spaniard John Rahm can also be found around the same price while defending champion Collin Morikawa can be found at 25/1.