Rory McIlroy reaches boiling point as he snaps his wedge on the par-5 12th in the final round of the Arnold Palmer Invitational. 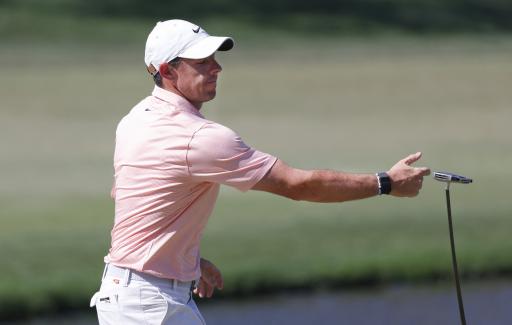 Rory McIlroy reached boiling point on the par-5 12th hole as he was seen snapping his wedge in frustration in the final round of the Arnold Palmer Invitational at Bay Hill.

McIlroy assumed early control of the tournament with a blistering 65 on Thursday but he soon tumbled down the leaderboard with rounds of 72 and 76 on Friday and Saturday.

The former World No.1 was only four shots off the pace heading into the final round but his slide down the board continued once more on Sunday.

NOW WATCH: RORY MCILROY STARES DOWN GOLF FAN WHO GIVES HIM ABUSE IN THE CROWD AT BAY HILL

After a sloppy bogey at the par-3 2nd, McIlroy followed it with a three-putt from three feet on the par-3 7th for a double-bogey five.

Out in 39 shots and out of the tournament, McIlroy's frustration boiled over at the back of the green on the par-5 12th.

McIlroy sent his approach over the back of the green into the rough, and after chipping his ball onto the green to some 15 feet, the Ulsterman snapped his wedge while walking across the green with his caddie Harry Diamond.

He would miss the putt and it was another bogey to leave him at 4-over par for the round.

Rory mcilory has had enough of his wedge. Tough day out there. Snaps it in two. Makes us mere mortals feel better #pgatour #rory #ArnoldPalmerInvitational pic.twitter.com/oZD3xkF0tF

"Oh boy, it's getting the better of him emotionally as well," said Nick Dougherty in the Sky Sports Golf commentary box.

"You know... I don't mind that, it shows he cares," added former US PGA champion Rich Beem.

McIlroy's problems sadly did not end there as he then sent his approach shot on the par-13th from the fairway bunker into the water.

It led to another bogey and McIlroy was 5-over par for his round thru 13.

McIlroy went on to card a second consecutive round of 76 to finish the week on 1-over par and outside the top 10.

Now Watch: PGA Tour pro LAUNCHES HIS PUTTER IN THE LAKE at the Arnold Palmer Invitational