Rory McIlroy did not take kindly to a golf fan who was evidently trying to wind him up during the third round of the Arnold Palmer Invitational. 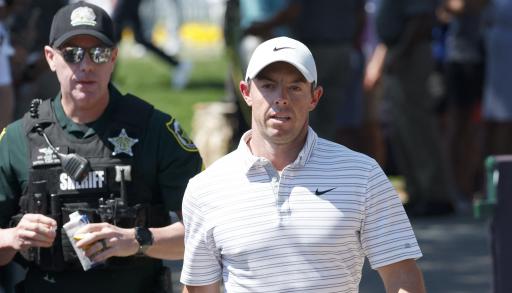 Rory McIlroy gave a stern and angry look at a golf fan who abused him during the third round of the Arnold Palmer Invitational.

McIlroy began the final round at Bay Hill four shots behind Billy Horschel and Talor Gooch, but he failed to gain shots on Sunday.

In the first 15 holes, the Northern Irishman made four bogeys and a double-bogey. He would've been at boiling point as he showed when snapping his wedge on the par-5 12th hole and during the third round on Saturday, one golf fan didn't help matters further at all.

"Not today Rory, not today! You've got to make those putts!" A golf fan shouted at McIlroy when he walked from one green to the next tee box in Florida.

It is fair to say that the four-time major champion did very well not to react to the abusive comments. He simply stared at the golf fan and remained calm.

Despite shooting 7-under-par in the first round of the tournament, McIlroy shot rounds of 72 and 76 on Friday and Saturday to fall four shots behind the leaders.

By the time this golf fan began to wind up the 32-year-old on Saturday, he was losing ground compared with the likes of Horschel and Gooch

McIlroy is a 20-time PGA Tour winner and he has represented Europe at every Ryder Cup since 2010. He has experienced every type of golf fan in every corner of the world.

It is unsure as to whether the golf fan was ejected from Bay Hill or not, however it is usually this type of behaviour that results in punishment for spectators.

Even if it is not McIlroy's week at the Arnold Palmer Invitational, like it was in 2018, he will return to TPC Sawgrass for the Players Championship next week in search of his first win of 2022.