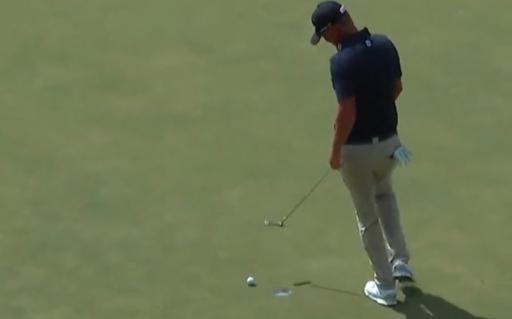 PGA Tour pro Matt Jones had the strop of the season so far after launching his putter in the lake on the par-4 11th during round three of the Arnold Palmer Invitational at Bay Hill.

Jones faced a downhill birdie putt from eight feet but as soon as he sent the ball in motion he immediately started walking after it and he even beat it to the hole.

He tapped it home and then hurled his putter in the lake while muttering: "I'm done, I've had enough with it."

Matt Jones threw his putter in the lake at 12!!

More: Jon Rahm missed a putt from 11 inches - but what about these shockers on the PGA Tour?!

Jones was forced to use his sand wedge on the greens for the remainder of his round.

He finds himself well down the leaderboard and 4-over-par for the tournament as things stand.

The 41-year-old has won twice on the PGA Tour with victories at the 2014 Houston Open and 2021 Honda Classic.

Jones is currently 80th in the world rankings and he finished third at the Sentry Tournament of Champions in January.

Since then though, Jones has struggled somewhat (as his putter frustrations clearly reflect) by missing four of the last six cuts prior to this week's tournament at Bay Hill.