Jon Rahm will not quit playing golf on the PGA Tour until he has won more majors than Tiger Woods and Jack Nicklaus. 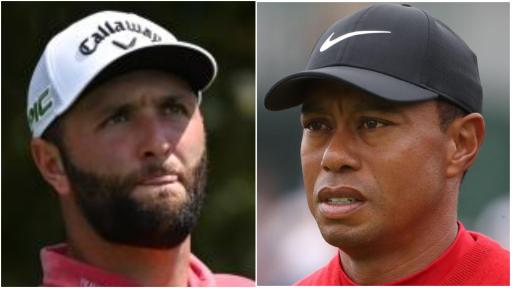 Jon Rahm will not stop playing golf on the PGA Tour until he has toppled Tiger Woods' major tally of 15 wins, according to Pat Perez speaking on GOLF's Subpar podcast.

Perez believes World No.1 Rahm, who he regularly plays practice rounds with at Silverleaf, will remain the greatest player on the PGA Tour for at least the next 10 years.

Despite having just one major victory to his name at the 2021 US Open, the 27-year-old Spaniard is also intent on beating Jack Nicklaus' major record of 18 wins.

Perez is even confident himself that he will achieve it, too.

"I think Jon Rahm is the guy for the next 10 years," said Perez.

"I don't think anybody is going to beat Jon Rahm consistently for a decade, that's just my opinion.

"I think he's going to have the most majors when all is said and done.

"We play all the time at Silverleaf and I asked him, 'What are you going to do at 35 [years old].

Watch: Jon Rahm misses one of the SHORTEST PUTTERS in PGA Tour history at Bay Hill from just 11 inches

Perez added: "Jon hasn't even started to get going yet. He expects so much. He hasn't really got into a pattern where he wins five or six times in a row, but I think he can do that."

As it stands, Rahm has six wins on the PGA Tour and one major at the 2021 US Open.

Nicklaus leads the major win count with 18 victories, with Woods in second on 15 and Walter Hagen in third with 11.

Rahm has been out of form of late and is winless around the world since his US Open victory last summer.

Much of Rahm's struggles, at least in recent weeks, have been down to the putter.

Missing putts from 11 inches have not exactly helped matters, either - WATCH HERE

Next Page: Here's what Pat Perez believes Phil Mickelson should have said regarding the PGA Tour