Rory McIlroy shot level-par in the first round of the Valero Texas Open as he begins his preparation for The Masters next week. 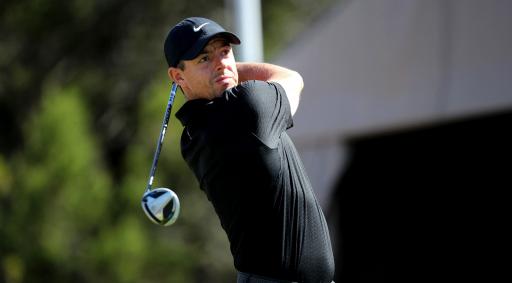 Rory McIlroy made a tame start to his first appearance at the Valero Texas Open since 2013, shooting level-par to sit well down the leaderboard.

McIlroy began his round with a perfect, booming drive on the 10th hole, but he made two bogeys in his opening four holes.

The Northern Irishman birdied three of his next four holes, but he made his third bogey of the day on th 18th hole as he made the turn.

He almost made a highlight reel eagle on the par-4 17th hole. His 60-yard pitch skipped across the green and rattled the pin, only for the ball to stay above ground for a kick-in birdie.

Related: Hideki Matsuyama: "I never thought it would receive the attention that it did"

That's one way to make it stop.@McIlroyRory nearly holes it for eagle on the par-4 17th. pic.twitter.com/6kVJmznGjs

Much like his first nine, McIlroy made three birdies and three bogeys on his second nine to finish with a 72. When he walked off the course at TPC San Antonio on Thursday, he was seven shots behind the early pace-setter Russell Knox on 7-under-par.

McIlroy will be looking for his game to peak this week ahead of The Masters which begins on April 7. The Green Jacket is the final piece of his major grand slam puzzle.

Rickie Fowler needs to win on the PGA Tour for the first time in three years this week if he is to make it to Augusta National. If not, he will miss out for the second consecutive year.

The World No.130 also shot level-par in the first round, making three birdies and three bogeys. Both players have work to do to move up the leaderboard.

He gets back into red numbers with this hole-out eagle at No. 2. pic.twitter.com/iLgXiGWx14

Bryson DeChambeau was one shot worse off when he signed his card on Thursday. His 73 was highlighted by an incredible bunker shot on the 2nd hole.

DeChambeau holed out from 27 yards to move back into the red numbers. But his round was littered with inconsistency, making only one par on his opening nine.

The former US Open champion is making his second appearance this week since returning from a wrist injury that had kept him out since the Farmers Insurance Open in January.