"Get it out of my face, man!" Brooks Koepka SNATCHES phone from fan

Brooks Koepka was involved in a heated exchange with a fan after he beat Jon Rahm at the WGC Match Play. 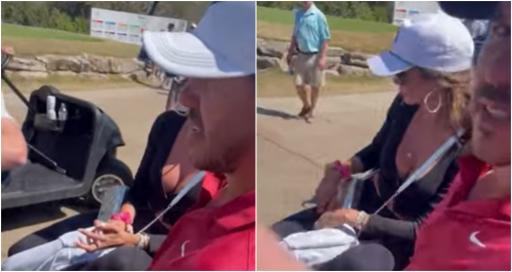 Brooks Koepka appeared to be involved in a tense exchange with a fan at the WGC Match Play.

The video was first obtained by TMZ Sports and they report that it came after Koepka, a four-time major winner, beat Jon Rahm.

At that tournament Koepka was also involved in another interesting exchange with some autograph hunters shortly before he was due to tee off.

Koepka told them he had to "go to work" and then appeared to use a line from the golf movie Tin Cup to stop being pestered as he walked across the range.

It was a play on the line: "I'm working here. This is my office. Do I come to your office and ask you for your autograph? I don't think so!"

Now footage has emerged from another exchange with Koepka, who is currently 16/1 to win next week's Masters.

In the 13-second clip, you can see a fan put a phone directly into Koepka's face as he sat on a cart with Jena Sims.

TMZ further claim that Koepka's manager returned the phone to the fan after a few seconds.

Koepka played well during the WGC Match Play at Austin Country Club but he was beaten in the quarter finals by former World No.1 Dustin Johnson.

Koepka's best finish at The Masters came in 2019 when he finished runner-up to Tiger Woods.

The big hitting American will be making his eighth Masters appearance next week after finishing in the top-10 in three of the four majors last year.

Koepka finished runner up to Phil Mickelson at the PGA Championship at Kiawah Island, T4 in the U.S. Open, T6 at The Open. He missed the cut at Augusta National last year.

He has struggled with injuries in recent months but admitted earlier in the season he finally felt like he was in a place where he was fully fit.