Hideki Matsuyama: "I never thought it would receive the attention that it did"

Hideki Matsuyama discusses pre-champions' dinner nerves and the iconic moment his caddie created when he won The Masters. 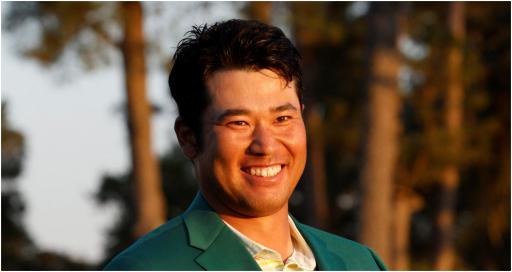 Hideki Matsuyama says he never thought his caddie's iconic bow to Augusta National would receive as much attention as it did as he prepares to defend The Masters.

Matsuyama faced a race against time to get fit for Augusta National because of a bad back that forced him out of The Players.

But he is playing at the Valero Texas Open this week on the PGA Tour in his last tune up event before the first major of the year.

The 30-year-old became the first golfer from Japan to win The Masters with a memorable one-stroke victory in 2021.

His nation gave him a hero's welcome upon his return from Georgia.

Related: What's in the bag of Hideki Matsuyama?

"I am looking forward to returning to Augusta National as the defending champion," Matsuyama told reporters this week.

"I am also looking forward to the champions' dinner and being with all those great past Masters winners."

He added: "I really hope to play well. There are lots of expectations for me, and I will be trying very hard to perform the best I can."

Matsuyama said he will be giving the toast at the dinner on April 5 in English, adding: "I am very nervous about the speech I will be giving."

There is no word yet on what he has chosen for the menu. Sir Nick Faldo once chose fish and chips.

The No.12 in the world was forced to withdraw from The Players at TPC Sawgrass earlier in March because of a bad back.

Matsuyama told reporters that he is currently at around 80 per cent heading into his final event before he attempts to defend his title.

When Matsuyama triumphed he was moved to tears. Usually, Matsuyama is quite reserved with his emotions.

His caddie Shota Hayafuji didn't know it at the time but he was also involved in one of the most iconic moments.

After Matsuyama sank his final putt, he put the yellow flag stick back in the hole, took his cap off and bowed to the course.

Renowned photographer David Cannon said he wished he had taken that photograph. It will stand the test of time.

Matsuyama said of his emotions: "Those tears were not because I had won.

"But as I walked off the green and saw all my team there, and saw that they were all crying, then I started crying myself.

"It was really cool to be able to share that with my team."

He said of his caddie's iconic moment: "I didn't see that actually happen.

"But I did see it later on TV, and I thought it was very special, a sign of respect not only to the Masters Tournament but also to Augusta National and something very good.

"But I never thought it would receive the attention that it did."