Rory Sabbatini forced to withdraw from API, but doesn't leave!

Rory Sabbatini was forced to withdraw from the Arnold Palmer Invitational at Bay Hill. 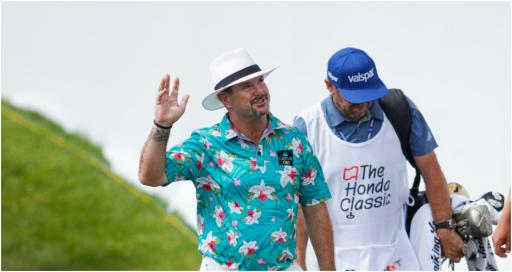 Rory Sabbatini was forced to withdraw during the third round of the Arnold Palmer Invitational on the PGA Tour.

The official communications team for the PGA Tour confirmed Sabbatini was suffering from a pain in his leg at Bay Hill.

"Rory Sabbatini is a WD during the third round of the Arnold Palmer Invitational presented by Mastercard due to a leg injury," they said.

At the time, Sabbatini was unfortunately 8-over par thru 13 holes. He didn't make it to the 14th tee box and instead withdrew.

The Slovakian opened up his week with not the best of starts. He signed for a 5-over par first round at Arnie's place.

Rory Sabbatini is a WD during the third round of the Arnold Palmer Invitational presented by Mastercard due to a leg injury.

More: Rahm missed from 11 inches, but what about these shockers?

He then followed that up with a second round 69 at the par-72 lay out, where Rory McIlroy had raced out of the blocks with Viktor Hovland.

When Sabbatini withdrew during the third round, he had made four bogeys and two double bogeys.

He was pictured on the broadcast gingerly raking a bunker and looked in visible anguish.

What was all the more remarkable was that after he withdrew, he continued to walk the course with his playing partners.

He even helped out with the raking duties, albeit gingerly:

Sabbatini is always an interesting character. In recent weeks he has caught the attention of golf fans with his colourful outfits and hats.

He was memorably disqualified from the RSM Classic earlier in the season when he fell foul of one of golf's stranger rules.

Sabbatini had accidentally left some stickers - used to collect data - on one of his clubs.

Only after his round he realised he failed to remove some reflective stickers from the club face of one of his fairway woods.

They are often used in practice to help track club head speed, which he discovered meant the club was non-conforming.

Under Rule 4.1 he was disqualified for breaching the golf rules.

Sabbatini is an Olympic silver medalist.

Next page: DP World Tour pro makes a nine on a par-3