Dean Burmester found out this sport is awfully lonely at times as Scotland's Ewen Ferguson holds a commanding lead at the Magical Kenya Open on the DP World Tour. 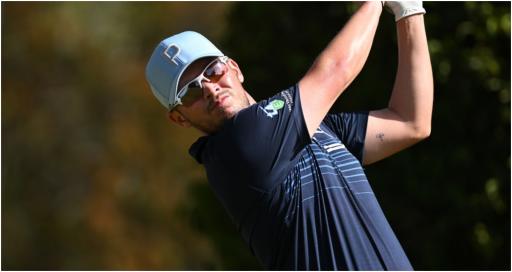 The good news for South Africa's Dean Burmester for now is that there is no video.

The DP World Tour professional signed for a sextuple bogey nine at the par-3 13th hole in round three at the Magical Kenya Open.

At Muthaiga Golf Club, the par-3 13th is not exactly easy at 191 yards but it's not exactly difficult. Yet Burmester had a rough time of it.

Unfortunately, there is no shot link data so at the time of writing we have no idea what happened.

All we know is that he followed that forgetful hole with a bogey and a double bogey. He did rally and got himself back to 1-under par for the tournament.

Scotland's Ferguson on the brink

What an approach! @EwboF takes the outright lead with an eagle at the fourth.#MagicalKenyaOpen pic.twitter.com/gltVcbbrGJ

Scotland's Ewen Ferguson will take a four shot lead over Wu Ashun into the final round.

The Scot entered day three a shot off the lead but ended it with a commanding advantage as a 66 moved him to 14 under.

He made 31 appearances on the DP World Tour between 2016 and 2021 but has full playing privileges for the first time this season after finishing eighth on last season's Road to Mallorca on the European Challenge Tour.

Ferguson birdied the first from 12 feet to join Shubhankar Sharma at the top of the leaderboard and then put a brilliant second to ten feet at the par-five fourth to set up an eagle and lead by two.

His lead was cut to one at the turn thanks to a dropped shot at the sixth but he re-established his cushion with a two-putt birdie on the par-five tenth.

The final group of Sharma and Masahiro Kawamura could not find any momentum and when Ferguson holed a 20-footer on the 14th, he was five shots clear of anyone else still on course.

More: What Viktor Hovland always does with his ball marker