Sahith Theegala on nightmare at Travelers: "It's really going to hurt"

Sahith Theegala reacts to his nightmare 72nd hole at the Travelers Championship as he endures another near miss on the PGA Tour. 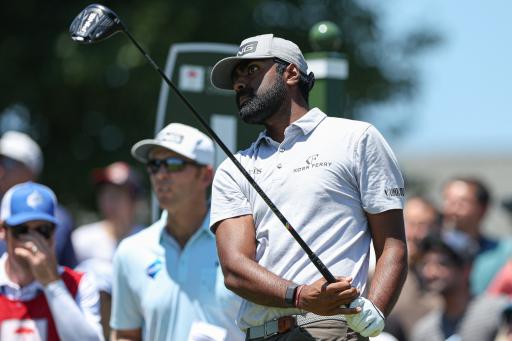 PGA Tour rookie Sahith Theegala admitted his nightmare 72nd hole at the Travelers Championship will hurt for a long time as “never in a million years” did he expect to blade a crucial shot.

Theegala grabbed a share of the lead at No. 15 during the final round at TPC River Highlands but once again it was heartbreak for the 24-year-old who also went close at the WM Phoenix Open.

The rookie decided to take driver on the final hole of his championship in a move that perplexed golf fans and analysts. He took two strokes to get out of a fairway bunker and ultimately lipped out for bogey.

He was lurking near the top of the leaderboard all day and hit the green at the drivable par-4 at 15. He only had four feet for birdie. He then overtook eventual winner Xander Schauffele at 17.

But then it all came crashing down.

When Theegala did find the green at 18 he had 12-feet for bogey and it lipped out. In absolute agony and in a sign of just how much it meant to him, Theegala dropped to his knees.

He told the media: “I knew exactly where we stood. Never in a million years did I think I would allow myself to blade it.

“All I had to do was chunk it. We even said, like, this is a 50/50 ball in terms of I got to try and just basically hit it just a hair behind it.

“[I] just didn't think I would let myself blade it. But I guess the moment was -- and then from there it's, like, got to try and make five now. Had a little more room.

“And I did the same thought process. I nearly bladed it again.”

More: Why Jason Kokrak was DQ'd from Travelers

He added: “Yeah, I guess I'll look and see how it actually looked on TV. But from there I hit a pretty good wedge shot there.

“I thought I spun it a little more, but it came in a little lower than I wanted. Hit a perfect putt.

“Somehow it just broke left at the end and lipped out there. So, yeah…”

Theegala was asked if he was still in shock during his press conference despite that painful hole happening 20 minutes prior.

But does he feel that now it is a matter of when and not if he will win on the PGA Tour?

“Yeah. I mean obviously I know and all the guys out here know how hard it is to win and how few opportunities there are to win,” he said.

“But just going to grow from it. I'm playing so -- I feel like I'm playing really well and if I just keep doing the same, keep loving the game.

“I love the process. I've never loved it more than I have now.

“So, yeah, I'm just I'm really excited to see if I can do it again, keep putting myself in these positions.”