Patrick Cantlay was tied for the lead after two holes in the final round of the Travelers Championship, but he went on to finish in a tie for 13th. 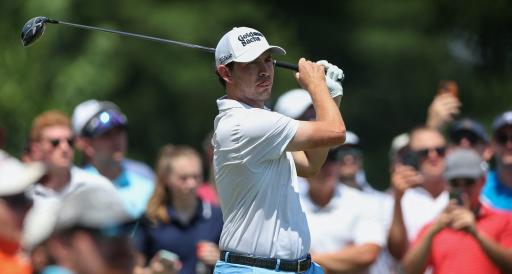 Patrick Cantlay produced quite a spectacular scorecard on the final day of the Travelers Championship, but it was spectacular for all the wrong reasons.

The World No. 7 incredibly made just three pars on Sunday in Cromwell on his way to a round of 76. He went from contending the lead to falling out of the top 10.

Despite bogeying the very first hole at TPC River Highlands, he birdied the 2nd hole and joined his good friend Xander Schauffele in a share of the lead on 16-under-par.

The unravelling was about to begin and it was personified by his tee shot on the par-3 8th hole. He hit a tee shot like that of a club golfer. It was fat, chunky and landed 57 yards short in the water.

Related: Report: Matthew Wolff expected to be announced as next LIV Golf player

57 yards short in the water.

Once tied for the lead today, Patrick Cantlay is now 5 shots back. pic.twitter.com/W4Mi1HFSlS

The American knew as soon as it left the club face. He managed to save a bogey with a monster 45-foot putt. This was his fifth bogey of the front nine and it would be one of nine bogeys on the day.

Cantlay made a double-bogey on the 12th hole and missed a putt not much longer than a foot for a par on the par-3 16th hole. Five birdies on the day weren't enough to hold back his severe inconsistency.

He shot 6-over-par and finished in a tie for 13th place, nine shots behind Schauffele. Although he is enjoying another solid and lucrative season on the PGA Tour, it could've been so much better for the 30-year-old.

He lost in a playoff to the World No.1 Scottie Scheffler at the WM Phoenix Open and he did the same at the hands of Jordan Spieth at the RBC Heritage.

Cantlay earned his seventh PGA Tour win alongside Schauffele at the Zurich Classic of New Orleans earlier this season, but he has often been left wanting this season when it comes to individual honours.