Sahith Theegala remains out in front at WM Phoenix Open 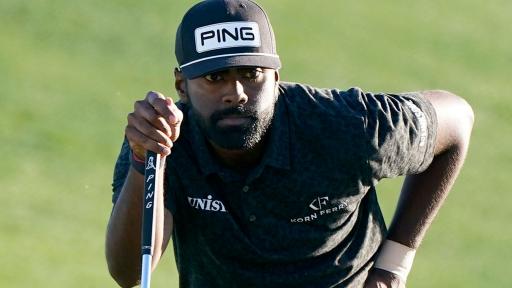 Sahith Theegala bounced back from some early nerves to remain out in front on day three at the WM Phoenix Open at TPC Scottsdale, on a day where Sam Ryder became the 10th player in tournament history to record a hole-in-one on the famous 16th.

Theegala stumbled out the blocks and fell out of the lead with a double-bogey at the par-4 2nd but he then composed himself to birdie three of four holes from the par-4 6th.

The 24-year-old bogeyed the tricky par-4 11th despite being fortunate not to find the water with his second shot, but he made amends with birdies at the 13th and 17th to nose back in front of some of the PGA Tour's biggest names.

Man on top. @SRTheegala hammers it home to take the outright lead. pic.twitter.com/2swVIvTb4z

Theegala carded a third-round 69 to move to 14-under par - making a superb up-and-down from the back of the green at 18 - to remain one shot ahead of defending champion Brooks Koepka, who went one shot better with a round of 68.

Patrick Cantlay recovered from a slow start to shoot a round of 68 and the reigning FedEx Cup champion lurks just two shots back on 12-under par alongside Xander Schauffele, who posted an up-and-down round of 69, Talor Gooch, who birdied the last three holes for a 67, and Scottie Scheffler, who fired a stunning low-round-of-the-day 62.

Masters champion Hideki Matsuyama is a further shot adrift on 11-under par following an improved 66, and he is joined by Max Homa (68), Alex Noren (67), Adam Hadwin (68) and last week's winner Tom Hoge (67).

Further down the board, World No.1 Jon Rahm and Justin Thomas matched each other for the third consecutive time this week with rounds of 68 and the pair look on from 8-under par.

The shot of the day came from Sam Ryder, who became the 10th player in Phoenix Open history to make a hole-in-one on the famous par-3 16th at TPC Scottsdale.

Ryder sent a wedge straight over the flag and spun it back into the cup to send the fans into a frenzy as beer cans went absolutely everywhere.