Sam Ryder caused absolute carnage on the 16th hole at TPC Scottsdale when he made his first ace on the PGA Tour in the third round of the WM Phoenix Open. 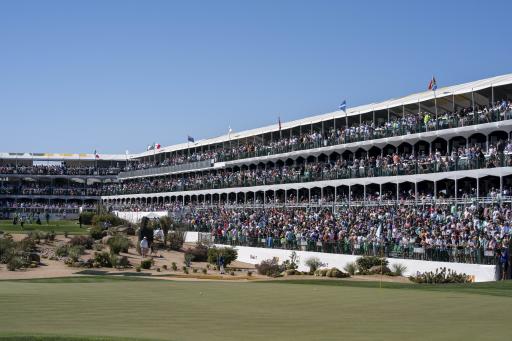 Sam Ryder described his hole-in-one on the 16th hole at the WM Phoenix Open as the "perfect 54-degree wedge" and the spectators were simply starstruck.

As the ball trickled into the hole, the noise was deafening. Even Matt Wallace heard the roar from the stadium hole when he was practising on the driving range.

It was the first hole-in-one at the famous hole since Francesco Molinari made an ace in 2015. Incredibly, it was Ryder's first ace on the PGA Tour.

It helped the 32-year-old reach 6-under-par for the tournament in tied 29th place after three rounds. He is eight shots behind Sahith Theegala.

Related Articles
FedEx Cup Standings: How the top 70 looks heading into the BMW Championship
FedEx St. Jude Championship: How much they all won

Fans at 16 describe the wild scenes after @SamRyderSU's ace. pic.twitter.com/qL6hRLdR4b

"Still kind of coming down off the adrenaline, but, yeah, it was pretty crazy," said Ryder.

"It just ended up being a perfect 54-degree wedge. Everything always plays a little shorter in there, adrenaline or whatever it is, it always plays shorter. And I just told (Pelekoudas), ‘It's just got to be that, doesn't it?’ And he's like, ‘That's all I ever thought'."

As you can see in the video above, the spectators were completely pumped by the hole-in-one, with some describing it as the best moment of their lives.

Take a look below at the best responses from golf fans to Sam Ryder's amazing hole-in-one on the 16th at TPC Scottsdale.

Incredible!! Can you imagine being that dude who sat there for 8 hrs and said, gotta hit the head.. be right back! What I miss?? @PGATOUR @WMPhoenixOpen

I love golf. I’ve watched this so many times. Golf needs more special holes on courses. Maybe not throwing stuff on the course but the hype was real.

Congrats on joining the hole-in-one club at 16th only the @WMPhoenixOpen along with @TigerWoods who made this hole special 25 years ago. How amazing. So happy for you @SamRyderSU pic.twitter.com/Zz4jXRMlVI

Every tournament needs to be this exciting, You will have fans come from every just to witness something as great as this shot. And even more golfers that will be inspired

That moment in time, that saw golf go viral worldwide.
It felt like the Kentucky derby~ a nascar pit crew and the WWE all rolled into one, while making a beer commercial!⛳

NEXT PAGE: SAM RYDER: WHO IS THE PGA TOUR STAR THAT JUST CAUSED MAYHEM AT THE PHOENIX OPEN