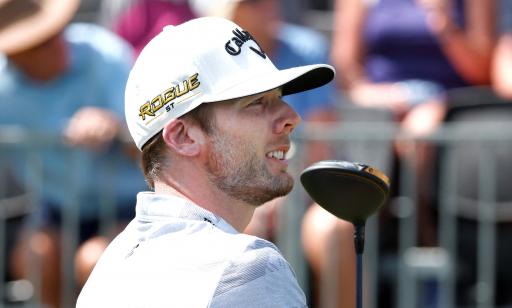 Sam Burns and Tom Hoge moved into a tie for the lead after (eventually) 36 holes at The Players Championship on Sunday afternoon.

Burns carded a superb 3-under 69 on Sunday to move to 7-under par alongside Hoge, who carded a respectable 71.

Related: The purse at this week's Players Championship is quite simply UNBELIEVABLE!

Burns hit the putt of the day when draining a 75-footer for eagle.

Burns, the World No.17, has won twice on the PGA Tour but this would be his biggest win to date should he go on to land the spoils on Monday.

Varner is still looking to pick up his first PGA Tour title, though.

England's Tommy Fleetwood is another player looking to break his duck on the PGA Tour and he has every chance at just two shots back on 5-under par, despite posting a 1-over 73.

Related: Keegan Bradley receives a BRUTAL two-shot penalty on the green at The Players Championship

Dustin Johnson and Daniel Berger are at 2-under par.

Golfers making the cut by R1 / R2 wave at The Players Championship:

Luck of the draw pic.twitter.com/2DkuTS5JEz

Further down the board, Rory McIlroy and Scottie Scheffler narrowly made the cut on the number at 2-over par.

Collin Morikawa and Patrick Cantlay both surprisingly missed the cut on 4-over and 5-over respectively, while Jordan Spieth and Xander Schauffele also missed out on the final 36 holes after finishing 7-over par. Brooks Koepka was even worse at 9-over par.

The tournament might be into its fourth day but all players have now finally completed two rounds. The third round will now start for those having made the halfway cut later this evening.

All going well and no more inclement weather, the third round will be completed on Monday morning, with the final round concluding later in the day.

It will mark the first Monday finish in Players Championship history since Fred Funk prevailed in 2005.

The tournament moved to May in 2007 through to 2018 and then reverted to its March fixture.

Tournament officials have confirmed the ball will be played as it lies in the fairway for the final two rounds.

Preferred lies had been in place for the first two rounds.

Now WATCH: Matt Wolff chucks his club in the lake at the 18th on day two at The Players