Matthew Wolff lost his cool on the 18th hole at TPC Sawgrass and threw his club into the water during his second round. 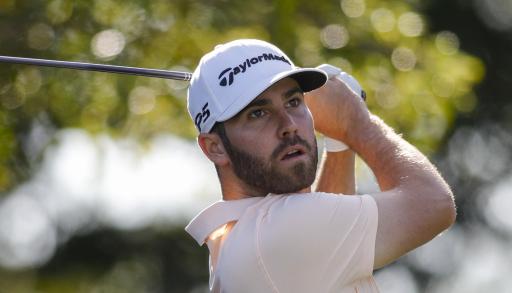 Matthew Wolff let his frustrations get the better of him when he threw his club in the water on the 18th hole at The Players Championship.

Wolff was 7-over-par for the tournament heading to the 18th tee box and he hooked his drive left into the huge area of water.

He dropped another ball by the entry point and pushed his approach to the green to the right. It was here when Wolff could no longer control his anger.

He nonchalantly, and almost stylishly, threw his club back over his left shoulder and into the water. You can see the ripples of the lake as his club submerges.

Related: Justin Thomas "BLACKED OUT" after bogey-free round at Players Championship

Matthew Wolff decided he was done with his @TaylorMadeGolf club here. pic.twitter.com/bOkTBhaGCI

The 22-year-old went on to make a double-bogey six and finished with a round of 81. He finished on 9-over-par for the championship and will miss the cut by some way.

Wolff's antics come just a week after Australian Matt Jones threw his putter into the water at the Arnold Palmer Invitational at Bay Hill.

The conditions have been absolutely treacherous at The Players Championship this week. The inclement weather has forced players to only just complete their second rounds on Sunday.

As for Wolff, his play at TPC Sawgrass this week has been typical of his inconsistent form this season. He will now miss his third cut in his last five events.

The one-time PGA Tour winner did begin the 2022 PGA Tour season well. He finished second at the Shriners Children's Open and tied 5th at Mayakoba.

Next Page: Brooks Koepka's record on 17th hole at TPC Sawgrass is SHOCKING!