Why Tiger Woods will carry on, according to one PGA Tour legend 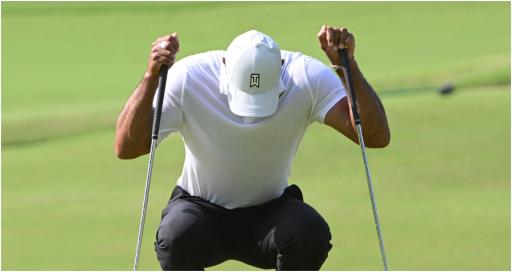 When Tiger Woods won the 2019 Masters, he revealed that career-defining win was for his children Samantha and Charlie.

Related: You're missing the point over Tiger's comeback, says JT

Throughout their little lives, they had only associated golf with their father's pain. They had only seen the rehab.

If that victory was for them, who exactly is he playing for now? Golf's icon looked beaten after 54 holes at the US PGA.

There have already been countless articles published about how the writing is on the wall for 46-year-old Woods.

It is arguable, to me at least, that watching Woods battle to make a weekend cut is the most relatable Woods we have ever seen.

In the past, you would expect Woods just to simply obliterate golf courses in the most extraordinary way possible.

The recently published biography about Phil Mickelson paints a very different image of Woods back in his hey day.

His nickname, in particular for Mickelson, was particularly unpleasant in my opinion. No doubt Woods has had worse.

"Loading hurts, pressing off hurts, walking hurts and twisting hurts," a beleaguered Woods admitted at Southern Hills before his withdrawal.

I know some people would rather see Woods hang it up. There is absolutely nothing to prove and he risks further injury.

There is no denying that his first ever withdrawal from a major was sensible. The 150th Open in just over 50 days' time could be the farewell?

That being said, even though St Andrews will provide an easier, flatter walk, will his body be able to keep up?

On the evidence of the Masters and the US PGA you would argue it's a categorical "no".

Howell revealed on the podcast that when he first started out in his career he moved to Orlando just to be closer to Woods.

To be as good as him, he thought, he needed to be around him. To learn from him. To talk to him.

"And, you know, he was the guy. I figured if I want to do this as a pro, let's hang around maybe the best to ever do it," he told the podcast.

Howell III revealed that Woods would love to eat bagels for breakfast as a junior golfer.

Everyday they would get up and see who could get to Einstein Bagels the fastest at 5.30am.

From there, it was who could get back to the course the quickest and practice the hardest. It's quite telling about his competitive nature, really.

So what gives now? Why is Woods still carrying on? What does he have to gain?

"The more people that doubt him, the more people say that he can't do it, he lives for that. I mean, that is why he gets up out of bed in the morning.

"Because, hey, listen, we all know financially he doesn't need to play. We all know he loves hanging around Charlie and Sam.

"He is only doing this to win. And trust me, there is a deep-seeded part of him in there that he is doing this also to prove people wrong. And when he gets bull-headed in that way, he usually does it."

Next page: Colin Montgomerie wades in on Phil Mickelson drama