Scottie Scheffler up to fifth in OWGR | Will he go to No.1 at The Players?

Scottie Scheffler vaults up to a career-best fifth in the World Rankings after winning a second PGA Tour title in his last three starts. 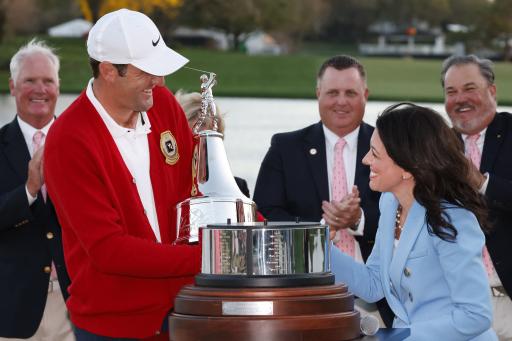 Jon Rahm might officially be the world's best golfer right now but there can be no denying Scottie Scheffler is the hottest golfer on the PGA Tour right now after landing a second title in his last three starts on the circuit.

Scheffler admitted to not having his best stuff on display at Bay Hill on Sunday, yet the in-form American's closing round of 72 in tricky conditions saw him prevail by one shot over Viktor Hovland, Tyrrell Hatton and Billy Horschel on 5-under par.

Now up to a career-best fifth in the Official World Golf Rankings, the 25-year-old from Dallas now has the chance to topple Rahm from the World No.1 spot with victory at The Players Championship at TPC Sawgrass this week.

Scheffler won his maiden PGA Tour title in a playoff over World No.4 Patrick Cantlay at the WM Phoenix Open last month and he then finished a respectable tied seventh at the Genesis Invitational hosted by Tiger Woods.

Now a two-time winner on the PGA Tour following his victory at Arnie's place, Scheffler is starting to build confidence and fulfil the promise that many had expected for him on the circuit.

"I've been playing some good golf the last few years, and it's nice to get a couple wins under my belt," said Scheffler, who now moves ahead of Rory McIlroy in the OWGR. "I'm looking forward to the rest of the season."

Scheffler also moves to No.1 in the season-long FedEx Cup standings.

Related: How much they all won at the Arnold Palmer Invitational

Rahm remains out in front in the OWGR and narrowly ahead of Collin Morikawa despite another cold week with the putter.

Hovland moves into third position despite his near-miss at Bay Hill, which would have marked a fourth win in eight starts, while Cantlay lies just in front of Scheffler in the fourth spot.

With huge world ranking points on offer at The Players Championship at TPC Sawgrass this week, there will likely be plenty of movement in the top five come next Monday morning when the list is revised.

Next Page: Scottie Scheffler used a limited edition club in his bag to win at Bay Hill