Ian Poulter believes the greens were "over the edge" at the Arnold Palmer Invitational. 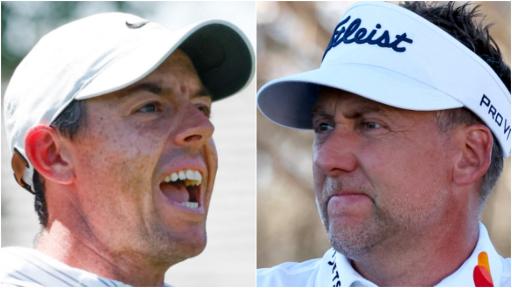 Ian Poulter has backed up Rory McIlroy's criticism of the course conditions at the Arnold Palmer Invitational by claiming the greens were "over the edge" on the weekend.

Poulter, who closed with a round of 5-over 77 at Bay Hill, took to his Instagram Story to post a screenshot of Gary Woodland putting on the 4th green with a caption ranting about the state of the greens.

"Here is a pretty good picture of the greens," wrote Poulter, who finished in a tie for 42nd despite starting the week with a 68.

"They were an incredibly pure surface that got baked. No moisture to hold friction to slow the ball down. They were over the edge.

"Trying to land it short of greens on a non links golf course [emoji face with monocle]."

Poulter's comments about the greens follow McIlroy's lengthy criticism about the course conditions, especially over the weekend.

McIlroy started the week brightly with a 7-under 65, but then tumbled down the leaderboard with a 72 on Friday and consecutive rounds of 76 on the weekend.

"I feel punch drunk, to be honest," said McIlroy after his final round that saw him finish the week in a tie for 13th on 1-over par.

Watch: Rory McIlroy stares down golf fan who gives him abuse in the crowd at Bay Hill

"The weekend, it's like crazy golf. You just don't get rewarded for good shots. Like I'm venting here and I'm frustrated and whatever.

"I think as well the frustration is it's a carbon copy of what's happened the last three years here. I started off really, really well with a 66 or 65. Friday afternoon conditions got a little tougher. Then over the weekend it's sort of been the same stuff.

"So three years in a row it's sort of been start off, lead the golf tournament, then you just sort of regress and come back to the field each and every day. Yeah, it's frustrating. It's hard to keep your patience out there."

McIlroy and Poulter will now both look to bounce back from their disappointing weekend performances at Bay Hill at the PGA Tour's flagship event of the season, The Players Championship at TPC Sawgrass.