Scottie Scheffler beat Patrick Cantlay on the third playoff hole at TPC Scottsdale to secure the first win of his PGA Tour career. 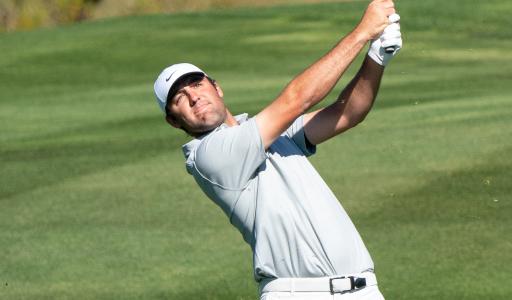 Scottie Scheffler can finally call himself a winner on the PGA Tour after he overcame Patrick Cantlay in a three-hole playoff to win the WM Phoenix Open.

The 25-year-old shot a 67 in the final round at TPC Scottsdale to reach 16-under-par and he missed a short putt on his 72nd hole to take the victory in regulation play.

In his first-ever PGA Tour playoff, Scheffler put things to bed when they returned to the 18th hole on the third occasion, rolling in a birdie putt to become the fifth first-time winner on tour this season.

"It's just a lot of hard work. She (his wife Meredith) has been so supportive of me and we worked really hard for this. I'm so appreciative," an emotional Scheffler said after his win.

"It's such a great place and such a fun week. I'm very pleased."

Scottie takes it in Scottsdale! pic.twitter.com/fhkEjrb13N

At the beginning of the day, Sahith Theegala held a one-shot lead over Brooks Koepka on 14-under-par. Both Cantlay and Scheffler began the final round two shots behind on 12-under-par.

Theegala, playing his first full season on the PGA Tour, made two birdies in his opening five holes to move to 16-under-par on what was an extremely competitive day in Arizona.

Cantlay moved along nicely on the front nine. He made birdies at the 4th, 6th and 9th holes to reach a share of the lead with Theegala on 15-under-par with nine holes left.

Theegala, 24, unfortunately, bogeyed the 11th hole to fall one shot back and it was at this stage when the leaderboard became very crowded.

Alex Noren of Sweden holed a 57-foot birdie putt on the 14th hole to get within one of the lead, while Theegala bounced back with a birdie on the 12th hole to share the lead again with Cantlay on 15-under-par.

Xander Schauffele went about his business in a quiet fashion at TPC Scottsdale. He birdied the 9th and 13th holes to reach 14-under-par and an extra roll of his ball would've given him a crucial eagle at the par-4 17th hole, after driving the green, to get into the eventual playoff.

An emotional @SRTheegala is consoled by mom and dad after coming up 1 shot short of a playoff @WMPhoenixOpen.

It was the final six holes when Scheffler began to rally. He made four birdies in a five-hole stretch from 13 to 17 and he reached 16-under-par.

In heartbreaking fashion on the short par-4 17th tee box, Theegala eyed up the green and hit a low, penetrating shot. His ball was coming in hot and skipped into the water. This turned into a bogey which took him back to 15-under-par which proved to be costly.

Cantlay carded a 67 to finish on 16-under-par and he watched on as Scheffler squandered a five-foot putt for his first victory on the PGA Tour on the 72nd hole.

The Team USA Ryder Cup teammates of 2021 went back to the 18th hole and had good tries at birdie, but a par each meant a second playoff hole was needed.

After they shared pars again, they returned to the 18th hole for the third playoff hole. Both players found the green, but it was Scheffler who rolled in a fantastic birdie putt to seal his maiden PGA Tour win.

NEXT PAGE: WATCH: HARRY HIGGS AND JOEL DAHMEN CELEBRATE A PAR PUTT BY TAKING SHIRTS OFF!