Harry Higgs and Joel Dahmen give it large on the 16th at the Phoenix Open after Higgs holes an eight-footer for par. 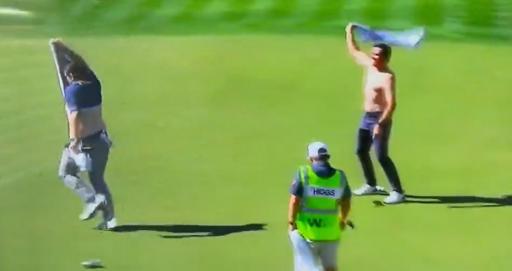 Harry Higgs and Joel Dahmen gave the fans exactly what they wanted on the 16th hole at the WM Phoenix Open as they gave it large on the green after Higgs holed an eight-footer for par.

Higgs sailed his tee shot over the back of the green at the iconic par-3 hole and then chipped up to eight feet.

But it was there that the fun really started as Higgs drained the putt and lifted up his shirt.

RELATED: PAIGE SPIRANAC JUST SAID THIS ABOUT HARRY HIGGS AFTER SEEING HIM TAKE HIS SHIRT OFF!

Beer cans flew onto the green in appreciation of Higgs' putt, and then Dahmen took his shirt off and flung it in the air.

Higgs and Dahmen then gave it large as promised with Higgs running across the green with his shirt off.

Kevin Kisner hilariously stood in the middle of the green taking it all in.

Earlier in the day, Carlos Ortiz became the second player in 24 hours to make a hole-in-one on the hole.

After the euphoria of Sam Ryder's ace on the same hole on Saturday, Ortiz hit the perfect shot again which was the 11th ever hole-in-one at the tournament since it moved to TPC Scottsdale in 1987.

WATCH: CARLOS ORTIZ MAKES A HOLE-IN-ONE ON 16 AT THE PHOENIX OPEN

Much like when Ryder made his hole-in-one, the 20,000 patrons surrounding the whole went absolutely crazy again.