Carlos Ortiz sent the 20,000-strong crowd into ecstasy with the second ace in two days at the WM Phoenix Open on the PGA Tour. 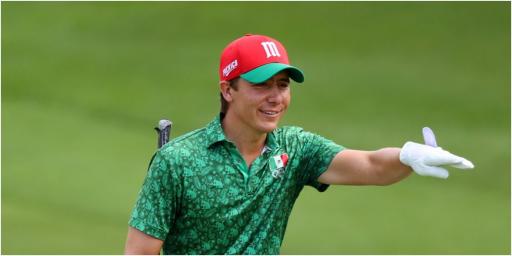 Carlos Ortiz had an absolutely bonkers finish to his WM Phoenix Open at TPC Scottsdale.

Whether or not the scenes upset you at the 16th green, one thing is clear: that was absolutely remarkable. Those clips will find their way into montages in the years to come. Where were you?

Ortiz followed up Sam Ryder's epic ace with one of his own on a Sunday evening of high drama which saw Scottie Scheffler get that illusive first win.

Will the floodgates open for Scheffler? You wouldn't doubt it. The tears flowed for Scottie, just as they did for Sahith Theegala, 24, whose dash for his first PGA Tour were ended at 17.

Ortiz had already hit the headlines earlier in the week. Not for anything that he had done, but a punter wagered $10,000 on him to win at odds of 150/1. Imagine if they put that money on him finding an ace?

The 30-year-old Mexican followed up his ace with an eagle hole out at 17. He explained that Kevin Kisner influenced that shot.

"I don't even know what to say. It was unbelievable. I didn't know how to react. A lot of people cheering for you and then you start trying to watch out for your head because I got actually nailed pretty hard on the back with a beer can on the back, and then after that I was just trying to just avoid all the cans I could.

"I don't know, I don't even know what to say. It was great. I just tried to react to what was happening."

Ortiz explained that the 16th hole is unique in golf. Even in the majors, you do not get that kind of response from people.

The adrenaline was clearly flowing for Ortiz. There was a 15-minute interval as staff cleared the green and bunkers of beer cans.

Ortiz told reporters that he thinks that ace was either his 10th or 11th, but that was his third on the PGA Tour in an official round.

So how did he celebrate?

"Tequila, some Maestro Dobel, and try to share it with everybody watching the Super Bowl," he said.

Ortiz also decided to part ways with the ball after his ace. He lobbed it into the crowd. "They were throwing things at me," he said. "So I throw something back to them."

The Mexican was in fact playing in front of Ryder when he aced the day before. Ortiz was asked if he felt better that his yardage was longer.

Ortiz said: "Yeah, a hole-in-one is a hole-in-one. Doesn't matter how far you hit it. Honestly, I don't remember. I think we were on 17. I think they were right behind us.

"I'm not sure. They were close to us, but it wasn't -- it's just one of those sounds that you know something happened."